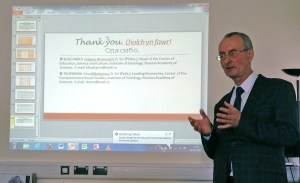 Professor Grigori Kliucharev recently presented as part of the WISERD Civil Society seminar series. His presentation, ‘Social and political participation in building democracy in Russia: The role of literacy programmes and educational reforms’, is based on research data on literacy, and social and political participation in Russia. This was conducted in 2014-2016 by Professor Grigori Kliucharev and Dr Irina Trofimova, from the Institute of Sociology at the Russian Academy of Science. The key question they are seeking to answer is, ‘How has education responded to social change in Russia and  how do literacy levels correspond to social and political activity?’

Civic education in the Russian Federation is part of public policy. Our data suggests that Russian society today is facing a choice as to what type of citizen is ‘needed’ for what tasks. It is important, it seems, not to oppose political ideologies but to give people the freedom and capacity to choose independently where, when, and how to realize their skills, knowledge and experience.

But participation in socially significant activities, privately, even anonymously or through routine, significantly raises the self-esteem of an individual as a citizen. The attitude towards personal responsibility and autonomy, of those we surveyed from various social groups, indicates that there is a demand for this in contemporary Russian society. This is shown primarily by young people (66%), by those already well educated, such as with higher education, (56%), and with a high level of material security (69%), as well as by users of social networks (61%).

However, this evidence of readiness to change, to show initiative, personal responsibility and independence by more than half of the country’s population (primarily youth) contrasts sharply with the low level of civic engagement. For instance, only 34% of Russians took part in several types of social activity, and only 57% in political activities.

However, it is also important to note that young people have a positive motivation for civic engagement, connected with self-realization and self-expression, gaining new experience and knowledge, and realizing the practical benefits of their actions. An example of such civic engagement, based on the possession of modern technology, is the use of the internet and of the blogosphere, which has seen a sharp increase in use recently, not only in Russia, but in other post-communist countries.

In conclusion, our surveys indicate that Russian citizens, are shifting gradually from the formal loyalty to the state and its agencies – which was typical for the former Soviet Union to a new form of civic knowledge and competence. This is a combination of political knowledge with the practical skills necessary for participation in public life.