In September 2017, McDonald’s workers went on strike for the first time in the UK. Researchers at WISERD analysed the social media conversation that surrounded the ‘McStrike’at the time. With a second McStrike scheduled for the 1st May Wil Chivers, Helen Blakely and Steve Davies outline key findings from this research.

McDonald’s is a major user of zero-hours contracts, reportedly employing 90% of its workforce in this way (42% of whom are under 21).

Critics attack these arrangements as exploitative, particularly for the low waged, and workers have responded with sustained collective action to fight for decent work around the world, most notably Fight for $15 in the US.

On 4th September 2017, 40 McDonald’s employees in two UK restaurants, mostly aged 25 and under, went on strike for £10 an hour, an end to zero hours contracts and recognition of their union.

One key element of the campaign was the way the physical presence on the picket line was complemented by its social media presence. McStrike was a simple and effective hashtag (a McStroke of genius if you like), and using this hashtag, we collected live data from Twitter over the two weeks before, during and after the strike. This produced a little over 90,000 tweets featuring #McStrike, from 46,247 different users.  We analysed this activity, identifying influential Twitter accounts and tweets. The network image below captures the first week’s activity: 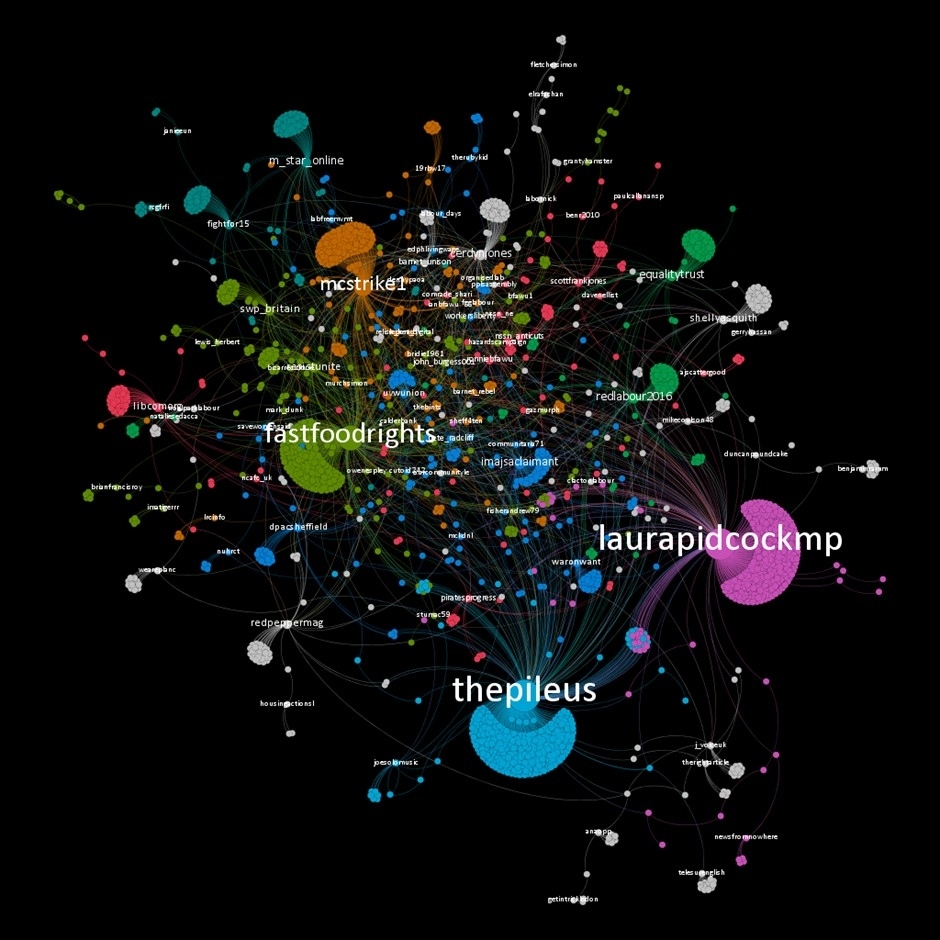 The social media campaign was designed to exert pressure on the McDonald’s brand by framing the protest with a strong social justice narrative, harnessing the symbolic power of the workers. Unsurprisingly, the defining characteristics of Twitter activity on the strike day were tweets and retweets of images and
videos of the picket lines.

McStrikers in the public eye

More detailed examination of the McStrike Twitter activity McStrike reveals one communication strategy that we plan to analyse in more detail: the prominent positioning of young workers in the campaign. In written accounts and, more particularly, in pictures and videos, the McStrikers’ stories were deployed to personalise the strike and generate popular support. Although McStrike was (and is) part of a wider labour movement campaign, it is notable for the ‘backstage’ support of the strikers’ own union, the Bakers, Food and Allied Workers’ Union and civil society organisations like War On Want.

Despite McStrike causing little in the way of disruption to McDonald’s day-to-day operations, in January 2018 McDonald’s recommended that its 1,200 franchisees increase pay for all staff (the franchises set their own pay rates). McStrike has implications for how we reformulate traditional conceptualisations of strike activity in the contemporary era, particularly in the light of social media.