Until now our research on the McStrike has been at a distance. We’ve followed the Twitter conversation and although we’ve got a good sense of what’s been going on, and who’s been involved, engagement through a screen is different to being there in person. So, on Tuesday 1st May – International Workers’ Day – we travelled to the Crayford McDonald’s in South East London, one of five stores where workers were picketing. 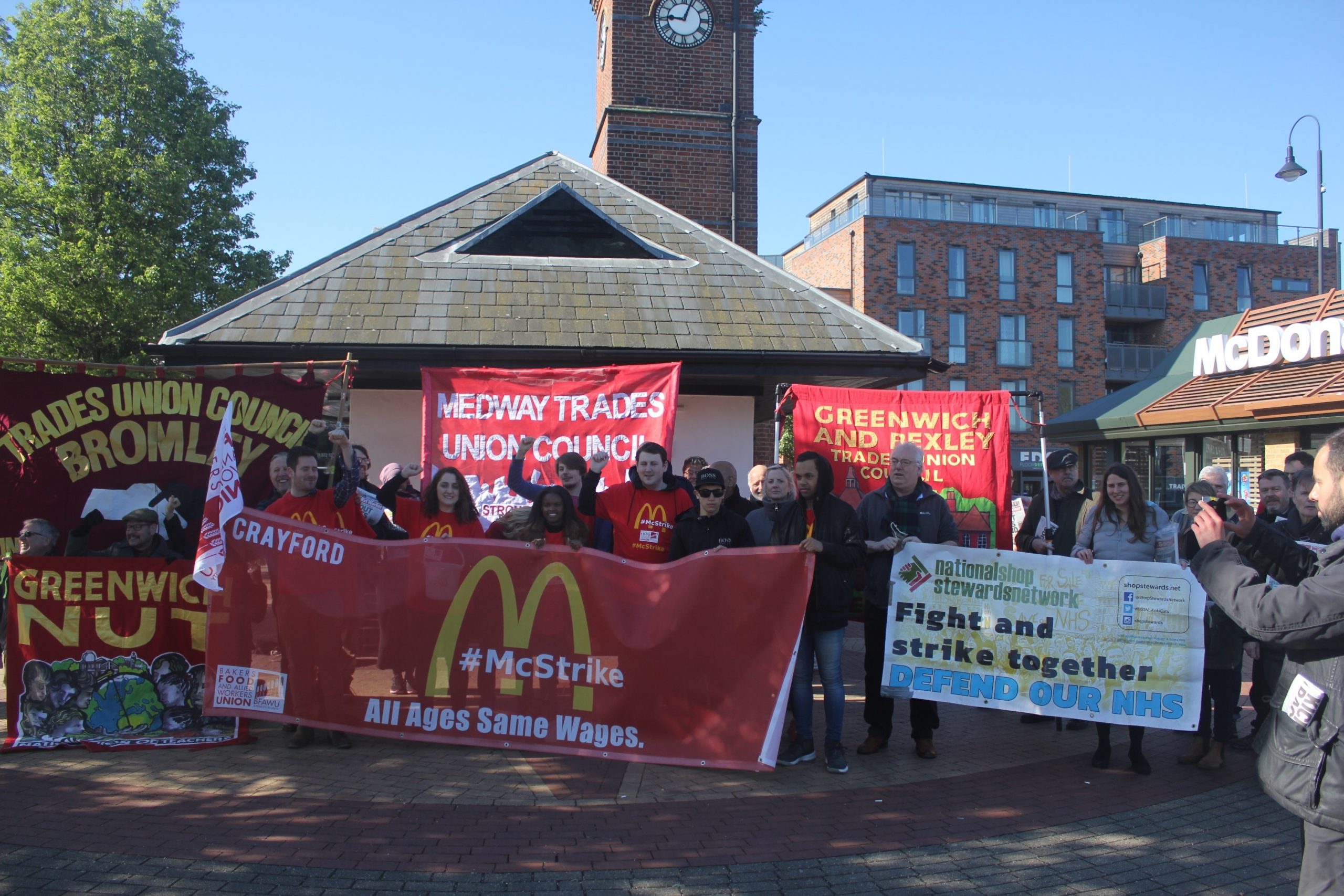 The atmosphere was buzzing when we arrived. A group of red t-shirt clad workers were gathered behind a large McStrike banner, joined by local trades councils, the Socialist Party and Socialist Workers’ Party, local councillors and candidates, and other union members. Shen – a former Crayford employee, now a BFAWU organiser – and Lewis, both recognisable from September’s strike coverage were leading the crowd in chants of solidarity and the catchy ‘Hold our burgers! Hold our fries! We want our wages supersized!’

As the picket packed up, we chatted to Shen and Stephanie, a new striker this time around. Stephanie was not daunted by standing up to managers it seemed. She had previously walked off shift because it was too cold in her store – her own ‘wildcat strike’, Shen joked. But the ethos of collective action was also clear. This has been about ‘working together, helping each other, to make things better’, Shen said.

The McStrikers made space for us on the minibus to Watford and we headed around the M25 to meet up with strikers there, as well as those travelling from Cambridge and Manchester.Conversations on the way about party politics, and current political issues facing the government confirmed the fact that these young people are, contrary to many popular notions, anything but apathetic. 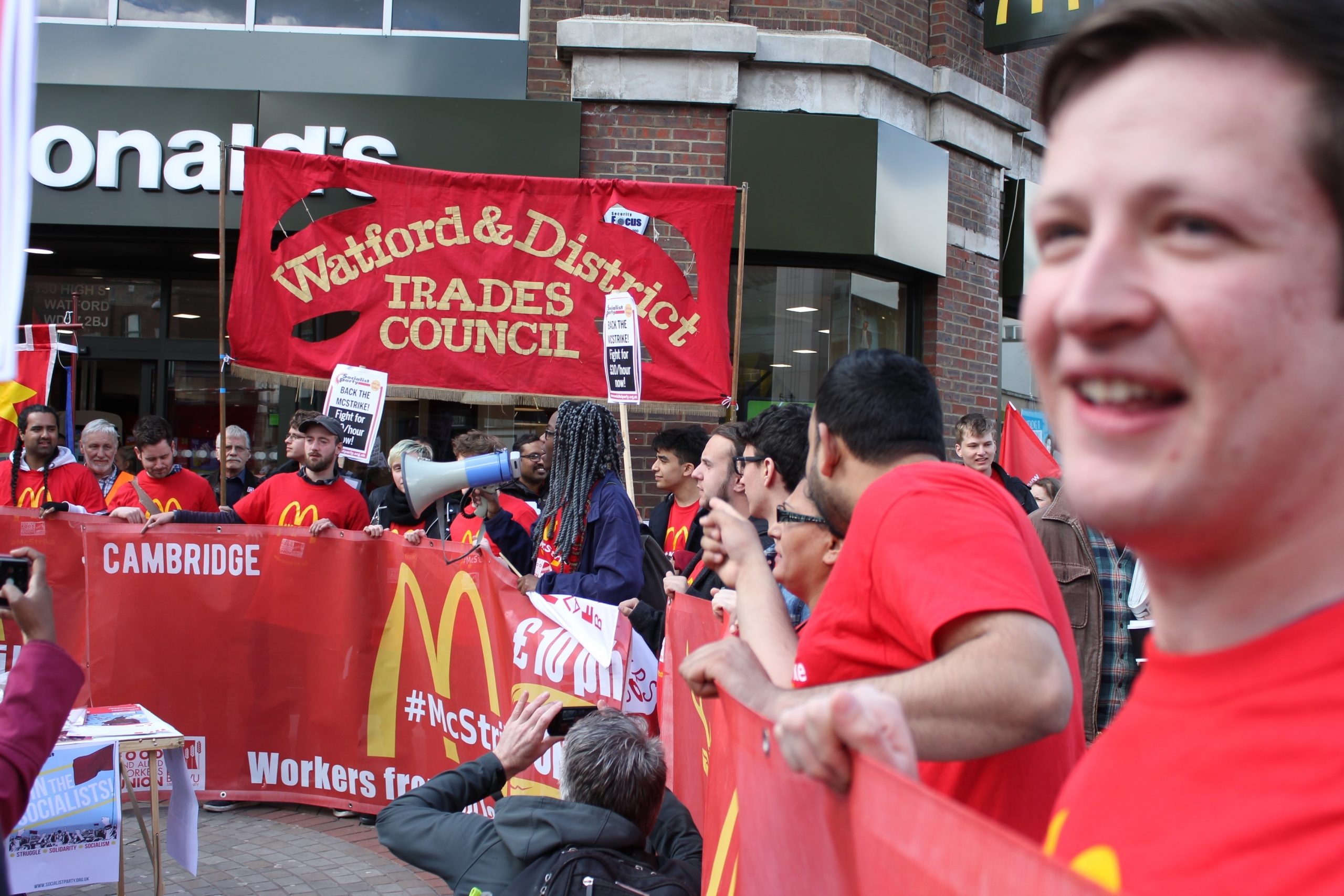 The scene on arrival at Watford High Street was more evidence of that. A large group of workers and supporters gathered outside the McDonald’s. Amidst further chants and songs we heard from Laura Pidcock MP (who was an active supporter of the McStrike in September, online and offline, and herself a former McDonald’s employee), and the President and General Secretary of BFAWU Ian Hodson and Ronnie Draper. Two McStrikers, Ali from Manchester and Richard from Watford, gave impassioned speeches about the strike. Ali said:

‘As far as I’m concerned, we made history today, what we did in Manchester. [Managers] always try to force us away, and I just want them to know, if they haven’t got the message already, it is not working.’

Also evident on the picket line were the links this movement is making to other groups and the precedent it may be setting. Representatives from Fight for $15 in the USA were there, and we also heard from Lauren, an employee at TGI Fridays who has been organising employees at her restaurant to strike. The ballot result at the two TGIF restaurants discussing strike action was released in the afternoon with 100% in favour of strike action on a 73% turnout. These actions are small scale, involving relatively few workers confronting very powerful companies. Yet the people involved in Tuesday’s events are aware of the impact they have had, and could have in the future. Groups of young workers in precarious employment in the service sector have joined unions, thrown themselves into campaigning and see their movement as the music of the future.