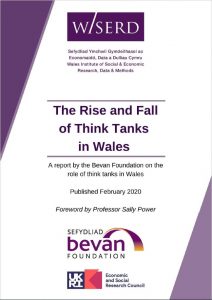 I have followed WISERD’s civil society project with great interest over the years. There is much for civil society organisations to learn from and to reflect upon in Wales as elsewhere. Yet in all of WISERD’s work there was a gap – and that was on think tanks. I was therefore delighted when WISERD asked me to write a think piece on their rise and role in Wales.

Think tanks – or more specifically the Bevan Foundation – will soon have accounted for nearly half my working life. As you might expect, think tanks are dear to my heart and I am saddened to see organisations that I regard as being a vitally important part of a thriving civil society often misunderstood and sometimes pilloried. Regrettably, the funding and methods of a small number of think tanks tarnish the reputations of all.

The number of think tanks in Wales has grown recently, although there are still relatively few compared with the number of UK think tanks. This phenomenon has not yet been documented, so it was an honour to be able to provide an account of their development. In doing so, I was surprised to discover the vast academic literature about think tanks. A lot of this literature is not in the public domain and virtually none of it seemed to have reached think tanks themselves. This is a shame, because as well as being useful context (it is always good to know what someone is saying about you!) there were some useful insights into, for example, different types of think tanks.

In writing this paper I was well aware that I have an ‘insider view’. I have not only shaped the growth and development of the think tank of which I am director, the Bevan Foundation, I have also contributed to the advisory board of another and I have engaged with most other Welsh think tanks and several UK think tanks over the years. However, I must stress that this is not a personal account:  I have relied on published sources rather than my own recollections, and I have done my best to avoid any personal views colouring the analysis and conclusions.

There is one exception to this effort to be non-partisan: I am convinced that think tanks in general are a ‘good thing’. This is despite recent concerns about transparency and elitism of some UK bodies, as well some theoretical questions about think tanks’ role in the reproduction of dominant ideologies. At least in Wales, I see think tanks of all kinds facilitating and contributing to public debate and developing robust and practical policy proposals. They are key to strengthening Wales’ relatively young institutions of government and developing Wales’ relatively weak civil society.

I also found that in many ways Wales’ think tanks mirror its wider civil society, in that the majority are small, under-funded and insecure. They do not attract either the business sponsorship or the philanthropists enjoyed by London think tanks. The exception was one large think tank, part-funded by government, so replicating in think tanks a pattern seen more widely in the third sector.

If we want to see good government and a better economy and society, Wales needs a plurality of think tanks, with different methods, priorities and ideological positions. Indeed, the relatively limited policy and influencing capacity of other parts of civil society – and sometimes their lack of independence from government itself – make independent ‘ideas institutes’ even more important in Wales than elsewhere.

I hope that this report puts think tanks on the Welsh civil society map, provides some insights into their origin and current position and, just maybe, persuades readers to value them.