Since February 2021, we have been working with a community group in South Wales who are concerned about the air quality in their local area.

We have adopted a participatory approach that facilitates the group’s work, but which also recognises the expertise of individual members and tracks how the group develops, shares and uses this expertise.

One aspect of this work is to examine citizen science in terms of ‘civic gain’ and ‘civil repair’. Civic gain occurs when the moral or material resources needed to exercise a right are increased, enabling more citizens to access a service or gain recognition for their needs. Civil repair is closely linked to this and reflects the benefits that accrue as social groups are enabled to become members of a civil community from which they were previously excluded.

The activity that we focus on might be more accurately termed ‘community science’. This is defined as “collaboratively-led scientific investigation and exploration [addressing] community defined questions, allowing for engagement in the entirety of the scientific process”.

By the summer of 2021, the community group had decided that its priorities involved getting a small number of DIY air quality measuring kits up and running from group members’ houses. We were pleased to be able to facilitate this through our WISERD research project. During the ESRC Festival of Social Sciences in November 2021 we held two workshops for group members during which we demonstrated the kits and distributed them to volunteers so that they could collect and share their own data.

The air quality measuring kits use Arduino electronics and were sourced by WISERD from Fab Lab in Barcelona. Weatherproof housings were built using plastic electrical junction boxes. Each unit has foam inside to help shockproof the kit and holes have been cut into the base of the housings to allow air to flow in and out. 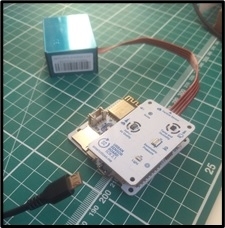 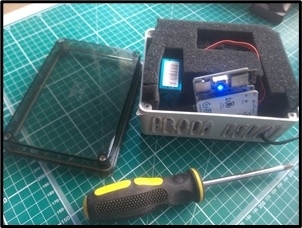 A Smart Citizen kit can run from a USB power cable (pictured above, top). It has sensors measuring light, noise, humidity, temperature, air pressure, as well as Particulate Matter (PM) of various widths in microns (note that a human hair is typically 70 microns wide) – eg, PM1, PM2.5, PM10 – plus carbon dioxide (CO2), and volatile organic compounds (VOCs). The housing for the kit (pictured above, bottom) makes it shockproof and weatherproof.

At the first ESRC Festival of Social Science workshop, the kits were explained and given to volunteers from the community group. We introduced group members to our citizen science research and a guest speaker from the Welsh School of Architecture at Cardiff University, Dr Simon Lannon (pictured below), who described how he has used a similar sensor to research indoor and outdoor air quality. 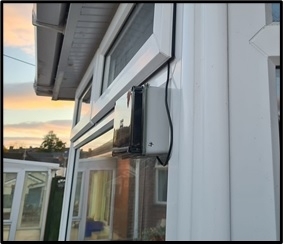 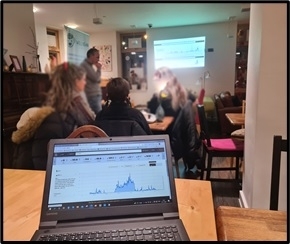 With kits running from several homes by the time of the second ESRC workshop (example pictured above, top), community members were able to compare their data on the Smart Citizen platform (pictured above, bottom). The example below shows PM2.5 readings (ie, for particles 2.5 microns wide, or about 35 times thinner than a human hair) over several days in November. Even over the few days the monitors had been running, there were clear spikes from motor vehicles in the mornings and evenings and some interesting discussions about whether the recent cold weather had led to an increased use of wood burners and a rise in night-time PM levels. This idea seems to be supported by later observations, as shown in the screen capture from one of the monitors, which shows data from the weekend of 17-19 December, 2021. As can be seen, pollution as measured by PM10 (blue) rises on Friday, Saturday and Sunday evenings as the temperature (red) falls.

Having opted, in the first instance, for a larger number of cheaper, but less precise monitors has enabled more members of the community to become involved, but these units may be less effective in challenging official data. For this reason, the next stage in measuring air quality in this community will involve the positioning of a professional kit on various lampposts around the town.

We plan to do this work in conjunction with a Welsh air quality monitoring company, Think Air, and will report back on how the community’s capacity to create knowledge about their environment is growing. We will also further examine how and why citizen science groups are an important element in the ecology of civil society organisations especially in relation to epistemic injustices, ie, the tendency for local knowledge/expertise to be excluded from official calculations.

Images kindly provided for use by Citizen Science Community Group.