As the start of another school year approaches, amongst the many challenges that providing a COVID-safe educational environment poses, reintegrating learners into a safe and secure learning environment will be key. Concerns have rightly been raised about young people’s mental health and welfare during these unprecedented times. Our research with children and young people as part of Children’s Worlds, published in Wales this week, has highlighted relatively low levels of well-being in schools, with satisfaction with their classmates amongst the lowest in Europe. This blog explores the data we gathered on bullying in more detail.

Children’s Worlds is an international study of children’s subjective well-being, receiving responses from over 128,000 children in 35 countries. Children are surveyed on many aspects of their lives and perceptions of their own well-being, including their well-being in school. Comparisons between Wales and other countries in the EU have shown that children in Wales show relatively low levels of well-being in schools, with satisfaction with their classmates amongst the lowest in Europe.

Within Wales, we collected over 2,600 responses from Year 6 and Year 8 school pupils, including questions on their social relationships in school. Whilst many countries showed low satisfaction with classmates, Wales had some of the lowest levels with just under a tenth of Year 6 pupils and a quarter of secondary school pupils reporting low satisfaction in this area. Social relationships are obviously complex and whilst the survey highlighted the support role that their peers played – the vast majority agreed that other children would help if they had a problem at school – children also reported relatively high levels of bullying and peer victimisation behaviours.

Children were asked the extent to which they had been hit, called names, and excluded by children in their class over the month prior to completing the survey in the summer term of 2018. On the whole, their responses did not deviate too far from the average for similar EU countries included in the survey. The exception to this was for Year 8 children in Wales, who reported the highest instances of others being unkind to and excluding them; 73% and 44% experiencing these behaviours at least once in the last month, respectively. 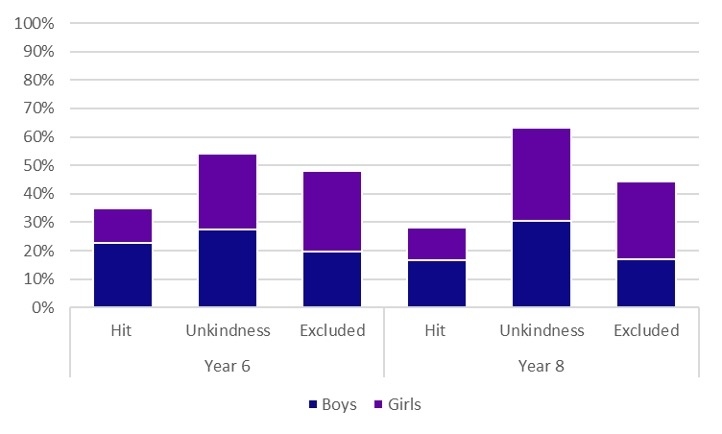 This preliminary analysis shows that there is still a great deal of work to be done to support healthy peer relationships amongst school children in Wales. Whilst it is encouraging that the survey showed that children felt that they had support from their peers should they run into a problem in school, this is somewhat marred by the prevalence of various forms of bullying and peer victimisation.

Findings from a recent survey by the Children’s Commissioner for Wales reveal that children and young people have found positive aspects amongst the trials of the current crisis. But aside from the welcome opportunity to spend more quality time with family, voiced by many who responded to the survey, the report also highlights the relief that some children feel from social pressures and the negative experience of bullying that is the reality of school life for many. As schools return in Wales careful thought needs to be given to how to create a school environment which fosters and maintains respectful and supportive peer relationships in order to secure and improve pupils’ well-being.