Early data suggests 15% of people in the UK have now lost their jobs due to Covid-19. Hidden within this figure is the disproportionate impact on already marginalised and disadvantaged groups, including black and minority ethnic people, women and those without a degree. Young people are also at the sharp end this surge in unemployment, as the Nuffield Foundation predict there is a risk of around 600,000 additional 18-24 year olds being pushed into unemployment as a result of the pandemic over the next year. This is largely because those under 25 were two and a half times more likely than the general population to work in a sector that was shut down when lockdown came into force.

The looming youth unemployment crisis will compound pre-existing disadvantages for young people attempting to find their feet in a turbulent labour market. Unemployment is already highest amongst 16-24 years olds across Europe, and in the UK during March 2020 11.9% of young people were unemployed compared to only 3.9% of the working age population; a longstanding trend exacerbated by the fact that employees not on PAYE payroll before 19 March 2020, were excluded from the UK government’s furlough scheme.

High levels of youth unemployment are coupled with a predicted increased prevalence of causal and precarious work post-lockdown. This will hit young people hardest as employers seek to scale down labour costs in the face of recession. Young people are more likely to be working on zero-hours, part-time, fixed term and commercial contracts. Around 9% of 16-24 year olds are on zero-hours contracts compared with only 3% of the general population. This 9% does not include all the ‘self-employed’ people and so the figure is likely to be much higher, as commercial contracts commonly replace employment contracts relieving the employer of insurance, leave, and employment protection obligations.

Part-time work is more prevalent amongst young people and often not a choice. According to research by the Pay Rise Campaign 25% of those working part-time and not able to get a full-time job are 15-24 years old. The same research shows 15% of 16-24-year olds to be on fixed term contracts compared with only 6% of the general population. As a final blow, Hick and Lanau show in-work-poverty to be more prevalent amongst young people aged 16-29 in the UK, worsened by their increased likelihood to be living in rented housing.

Amidst the rising tide of labour market disadvantage, young people appear to be relying less on state support. Benefit claims by 16-24-year olds are dropping according to a Big Lottery funded study at Sheffield Hallam University. The study shows the rate of 16-24-year-olds eligible for benefits has risen steadily since 2009 while the numbers claiming benefits has fallen. Reasons for this could be illness, support from friends or family and working in the informal economy. However, increased conditions and sanctions on benefits since the 2010 welfare reforms, is also a very likely reason for fewer young people claiming social security; particularly if they are periodically unemployed for a short time.

To date the study has found over eighteen thousand Civil Society organisations working in the field of youth unemployment. Many of them focus specifically on service orientated activity to do with employment and skills, such as training, signposting and mentoring support. Fewer focus on capacity and confidence building, empowerment and dealing with issues for young people further from the labour market such as mental health, alcohol and drug addiction. Fewer still take a prevailing policy-orientated approach and those that do tend to be larger, umbrella organisations advocating on behalf of small, service-oriented Civil Society organisations. The number of organisations varies between the four nations of the UK, as so:

However, even with the data entry issue, a larger number of Civil Society organisations in Northern Ireland and Scotland focus on general and holistic issues including but not limited to youth unemployment, which would explain the higher proportions in a more meaningful way. Specifically, in Northern Ireland and Scotland (and to a lesser extent Wales) more Civil Society organisations are carrying out broad, all-encompassing work such as ‘community development’ and ‘citizenship development’ for the purposes of ‘improving conditions of life’ and ‘raising self-esteem’ in the interest of ‘social welfare’ and ‘wellbeing’. These activities are often with young people and framed as general ‘development’ which could lead to increased chances of employment. In England there is more focus on providing ‘work experience’ and ‘training’ for young people which should lead to employment.

Research by Mark Simpson at Ulster University examines the views of political elites in Scotland and Northern Ireland. He finds Northern Irish and Scottish politicians are often uncomfortable with central UK government social security. Specifically, he highlights a devolved “social citizenship that subtly, but genuinely, differs from that driving policy developments at Westminster”. This difference is encapsulated by a higher concern, at devolved level, with alleviating poverty and a ‘welfare-to-work’ model that aims to support rather than intimidate or force the unemployed into work. Crucially this research shows devolved narratives focusing on ‘a living wage’, ‘fair work’ and ‘job security’ while the same narrative is largely absent from the UK central government’s welfare reforms; exemplified by single parents and over 65s no longer being exempt from job seeking.

The data presented here shows a possible link between the devolved political and cultural attitude towards social security identified by Simpson and Civil Society organisation activity in the devolved territories, in the field of youth unemployment. To develop this idea further WISERD research will examine Civil Society organisations in more detail, beginning with a better understanding of variation between their key characteristics. 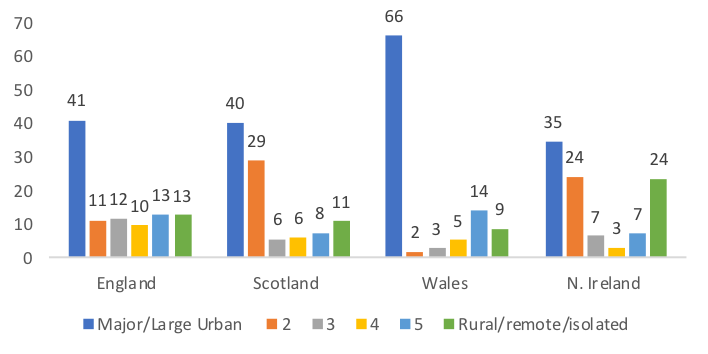 We know Civil Society has a vital role to play in the coming youth unemployment crisis, based on the dynamic response from Civil Society organisations to the Covid-19 pandemic so far – and has highlighted the value of small organisations for their responsive and grassroots work. However, the early findings from this study indicate clear variations between the four nations of the UK in terms of approach, size and geography of Civil Society organisations. We also know that youth unemployment policy makes a difference and, when it treats young people as a resource to be invested in rather than a problem to be tackled, it is more successful. It is likely, therefore, that we can learn from comparison between the four nations and specifically from the more social-democratically-leaning narratives driving policy in the devolved territories, especially Scotland. These initial findings are a springboard from which to further examine devolved social policy and its role in a rapidly changing sector’s size, shape and activity to address youth unemployment.

The next stage of this project will examine the civil society numbers presented in Table 1 to better understand the work they are doing with young people. This will involve a textual analysis of civil society ‘objectives’ and further investigation using websites, emails and research interviews. The next blog on this project will give a detailed breakdown of the results showing civil society activity in the four nations, for a clearer understanding of the difference in numbers seen in Table 1.

[1] The numbers and percentages presented here are approximate due to the rapidly changing shape of civil society; the use of multiple sources (though duplicates have been removed); and the word search method used to identify those working in youth unemployment.

[2] The way data is entered into the Northern Irish Charity Commission Database makes it harder to rule out certain organisations based on activities carried out, using a word search tool, which partly explains the higher percentage.