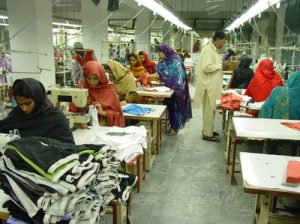 New research from the Clean Clothes Campaign and WISERD at Cardiff University reveals the urgent need for expansion of the International Accord in Pakistan, a legally binding safety agreement to protect workers.

2022 marks 10 years since the horrific Ali Enterprises fire that killed over 250 garment workers in Pakistan yet rights for workers in the garment and textile industry have hardly progressed. There is still no safety agreement that holds employers and international brands accountable for implementing basic safety protocols and procedures, leaving workers in almost the same conditions that led to this catastrophic fire – the deadliest ever in the global garment industry. This is evidenced by data collected by an incidence tracker which has recorded over a dozen incidents resulting in deaths and injuries in garment factories in Pakistan over the past 18 months.

In Pakistan, an estimated 2.2 million workers produce garments, 1.8 million make textiles, and 200,000 are employed in the footwear and leather industry, supplying for large global brands such as Levi’s, H&M, and Ikea. To understand what changes need to be made to protect workers, the Clean Clothes Campaign conducted a broad survey of almost 600 workers covering issues from workplace harassment, workplace health and safety, and worker wellbeing.

The most pressing of the issues were the deficiencies in some of the most basic provisions for factory safety in garment production in Pakistan, even those mandated by law. 85% of workers reported no access to proper exit stairwells in the case of a fire. One in five workers reported that their workplace lacked fire drills and were unaware of emergency escape routes and exits. Additionally, the survey found that independent factory inspections were not taking place in Pakistan, therefore while workers reported the existence of fire alarms and some safety mechanisms, there have been no regular inspections conducted to ensure systems and equipment are operating safely.

Worryingly, in factories where women account for the majority of workers, only three-quarters of workers reported that they had access to escape routes that were clear from obstruction.

The results of the survey illustrate the pressing need for the International Accord for Health and Safety in the Textile and Garment Industry to expand to Pakistan. The Accord would ensure regular independent factory inspections by qualified engineers, require compliance with time bound corrective action plans to correct identified safety hazards, and provide a complaint mechanism by which workers can hold factory management accountable for implementing safety procedures, without fear of retaliation. The involvement of local unions and other local workers’ rights organisations in the design, governance, and implementation of the expansion of the Accord to Pakistan will be of vital importance.

These conditions cannot be ignored any longer by those who preside over the global supply chain. Ineke Zeldenrust of Clean Clothes Campaign remarks, “The responsibility to ensure factory workers in Pakistan are safe when they go to work falls on the brands who source and profit from these factories. Brands have the power to lead the way and make changes with the potential to improve the lives of millions of workers by giving them what we should all be entitled to expect – a safe and healthy workplace and the right to be part of the process of making it so.”

Nasir Mansoor, General Secretary of National Trade Union Federation in Pakistan states, “Workers and local unions have been demanding a binding safety agreement for years. Implementing the International Accord in Pakistan would not only ensure the safety of workers but also ensure workers have space to negotiate directly with brands and factory workers. Workers in Pakistan are in desperate need of a binding safety agreement, not only to fix safety issues within factories but to also provide workers security by fixing the low rates of worker registration.”

Khalid Mahmood, Director of Labour Education Foundation in Pakistan states, “Even though the health and safety laws in Sindh and Punjab provinces have been strengthened in the last few years, without proper implementation of these laws and absence of effective labour inspections, workers’ safety cannot be ensured”.

Zehra Khan, General Secretary of Home Based Women Workers Federation in Pakistan states, “It’s clear that workers’ safety is a gendered issue, with women faring consistently worse than their male counterparts in the garment industry. Implementing the Accord would have enormous benefits for women’s safety in the workplace and would give us a mechanism to have our complaints properly heard and responded to.”

Professor Jean Jenkins, WISERD co-director, based at Cardiff University, said, “We are delighted to see the publication of this important report by the Clean Clothes Campaign and their partners in Pakistan. At this time, when the International Labour Organisation is fore-fronting health and safety as essential to its decent work agenda, this report highlights the pressing need for workers and their representatives to be heard in their struggle to create safer workplaces in the international garment sector.”