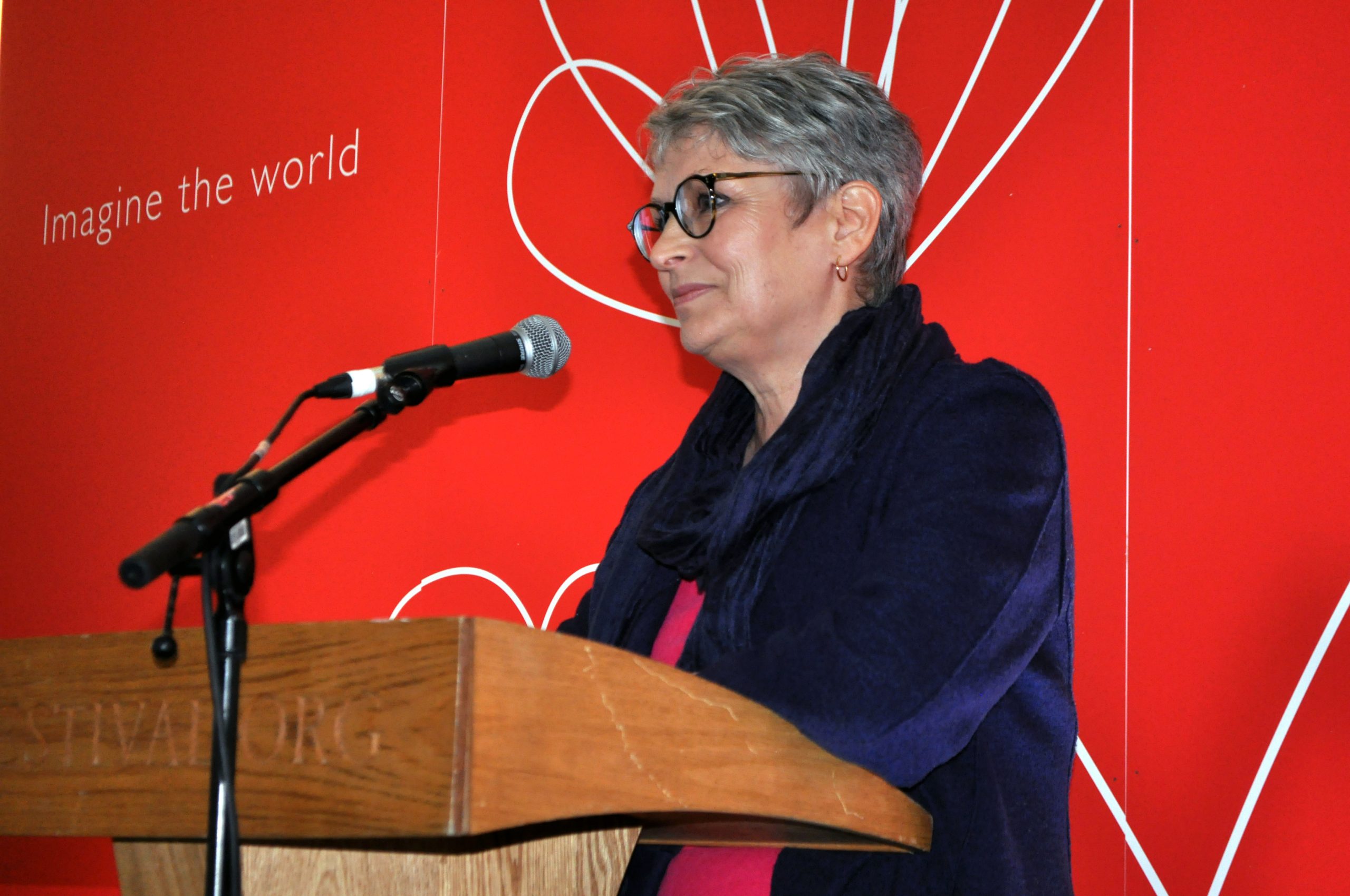 On Tuesday 28th May, Dr Jean Jenkins presented her research on employment rights at one of the world’s best-known literature festivals. Her talk, ‘Fashion – an Industry of Gross Exploitation’ explored the history of an industry that was long ago described as a ‘parasite industry’ as a result of the shocking mistreatment of its workers. It is a reputation that continues to thrive today in clothing manufacture. Nevertheless, workers are not hapless victims – they fight back, and this talk shone a light on workers’ struggles against the odds.

In 1909, Nancy Meyer and Clementina Black wrote The Makers of our Clothes, and submitted their documentation of working practices in the clothing trades to the UK’s Board of Trade in an attempt to gain state support for regulation on minimum standards of pay and employment. Jean emphasised the continuing relevance of their documentation of what was then called a ‘parasite industry’ for 21st-century garment factory workers, both in the UK and across the globe.

Jean said: I am here to dispel any myths that the clothing manufacture industry is still anything but one that has always targeted the vulnerable”.

Jean continued: “[It] is an industry that isolates individuals through the process of manufacture.”

However, from the past to the present-day, workers have gathered together, organising and resisting against their employers, as a means to access to the most basic of employment rights – the right to bargain in defence of their own interests.

By the mid-twentieth century advances had been made in pay and working conditions as a result of state regulation and trade union organisation, but the ‘Great Garment War’ of the 1980s and beyond marked the relocation of the industry to newly industrialising regions where workers have again faced gross exploitation at the hands of a global supply chain and business model whose prime focus is to drive down costs.

Workers’ conditions suffer accordingly and the sub-contracting of manufacture distances the commissioning brand from responsibility and accountability. Thus it is that on the ground today we see a consistent failure of corporate social responsibility and we cannot simply accept reassurance from the brands that all is well in their supply chains.

Some of the issues that 21st-century garment factory workers are subject to, include: verbal abuse; deprivation of rest, food, water and toilet breaks; humiliation and harassment; and victimisation for organising into independent trade unions. Sadly, as consumers, we typically only hear about these working conditions when failings in safety amount to major loss of life and the media is forced to pay attention. However, in the hidden corners of the supply chain, the daily deprivations of low paid work grind on and tragedies still happen unseen.

Audience members asked questions about what they, as consumers, could do to help. Jean explained that boycotting brands and retailers is not the answer, and that there is not necessarily a link between the price of clothes and the degree of exploitation. However, questioning the brands and retailers is crucial. When doing so, we should be asking about workers’ bargaining rights and dignity at work, not simply what they earn. Campaigns and trade union engagement with issues for the marginalised worker, wherever they live and work, can also be supported.

At Hay Festival’s celebration of literature and creativity, it seemed fitting that Jean should emphasise how songs have historically provided a means for workers to unite and have their voices heard. As musical bookends to Jean’s presentation, audience members listened to a group of today’s garment workers singing in unison. This was a powerful reminder of Jean’s message to past, present and future workers struggling within an industry that by its actions embeds them in poverty: “Organising is what empowers. Fighting back is what truly emancipates.”

Dr Jean Jenkins is Reader in Employment Relations at Cardiff University. Jean is working on a UK government-funded Global Challenges Research Fund project with WISERD, which investigates the availability of access to remedy for garment workers in today’s garment supply chain. Jean was one of three Cardiff University academics to take part in this year’s Festival.

Hay Festival is an annual literature festival held in Hay-on-Wye. In 2019, the festival ran from 23rd May to 2nd June and was expected to bring over 110,000 people to Wales.