Dr Stuart Fox has been awarded the Dillwyn Medal for Social Sciences from the Learned Society of Wales. He is among three researchers from Cardiff University to have received an award in recognition of outstanding early career research. 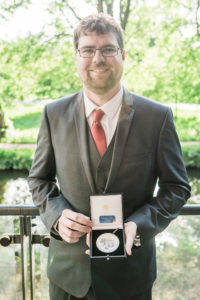 The medals were awarded on the evening of the 22nd May at the Royal Welsh College of Music and Drama in Cardiff, in a ceremony celebrating achievement in academia. The medals were created to inspire and recognise the long – and often overlooked – legacy of Welsh achievement, while celebrating the exceptional researchers of today.

Dr Fox was awarded the medal for his work on the study of political and civic attitudes and behaviour, which uses social surveys and quantitative research methods. His work has considered young people’s political engagement, specifically during the EU Referendum and Brexit, and the 2017 general election.

His recent work has also explored youth volunteering, and specifically whether it can help to engage more young people with politics and reduce inequalities in turnout, and he has worked with the Welsh Government’s Task and Finish Group on volunteering funding.

On receiving the award, Dr Fox said: “The life of an early career researcher can be extremely challenging and unpredictable, and it is immensely gratifying to see such hard work recognised. I am extremely grateful to my colleagues for nominating me and providing invaluable support and guidance throughout my academic career, and I look forward to continuing to work with them to help develop the next generation of social researchers in Wales.”