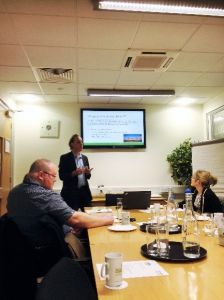 On 2nd February Prof Paul Chaney presented the findings of a recent study of political representation to a seminar organised by the Chwarae Teg Research Hub.

The paper analysed the parliamentary scrutiny of the substantive representation of women (SRW) in UK Governments’ Post-War legislative programmes. The SRW refers to the situation whereby women’s needs and concerns are reflected in policy and law.

Seminar participants heard how women’s representation has been marginalised in UK politics with just 26 legislative proposals concerned with the SRW in 22 King/ Queen’s Speeches 1945-2012 (<1 % of all post-war legislative programme proposals). Notwithstanding the Conservatives’ greater time in office, Labour accounted for 69.2 per cent of the post-war SRW legislative proposals.

Left-party dominance is also a feature of the scrutiny of post-war governments’ legislative programmes – with Labour again responsible for more than two-thirds interventions on the SRW in ‘First Day Debates’ (the plenary scrutiny sessions where opposition and back-benchers critique governments’ plans for the forthcoming parliament).

The study engaged with a core debate in the political science literature, namely the relationship between critical mass and critical actors. In other words, the extent to which the substantive representation of women is driven by the overall presence of women parliamentarians (‘critical mass’) as opposed to the actions of key feminist activists (‘critical actors’).

The analysis revealed that whilst the post-war increase in the number of women MPs was a contributory factor (women currently constitute 29% of MPs – compared to 3.8% in 1945), the increased scrutiny of the SRW was principally due to the actions of critical actors. The study also found that there had been a qualitative shift in the nature of scrutiny; MPs have moved from the short interventions arguing the case for equal representation as seen in the immediate post-war years, to more detailed deliberation in recent decades on the precise means by which the SRW may be realised in public policy and law.