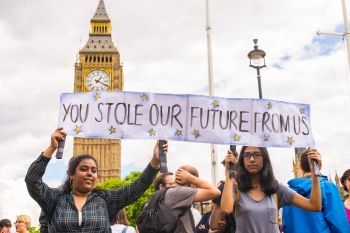 WISERD has recently been awarded ESRC funding to carry out a new interdisciplinary study into how young people in the UK feel about, and are responding to, the most significant policy issue of this Parliament: the UK’s exit from the European Union.

Young People and Brexit will include new and existing WISERD research, employing a variety of methods and drawing on data from a range of sources. This will include nationwide surveys, and interviews and discussions with young people. It will also see the production of two short research films featuring young people and addressing questions such as, how are young people feeling about Brexit, and what impact is it having on their political engagement?

A dedicated team of researchers based at Cardiff University and Aberystwyth University – Dr Stuart Fox, Professor Rhys Jones, Dr Sioned Pearce, Dyfan Powel and Dr Elin Royles are working together on the project with external organisations involved in youth political engagement, such as Youth Cymru, the National Assembly for Wales and Members of the UK Parliament.

Dr Stuart Fox said, “We are excited about bringing together such a large team of academics, young people and third sector experts to consider the important question of how young people are responding to and engaging with Brexit.  This wide range of expertise and experience means we can consider not just how Brexit is affecting young people and how they feel about it, but how it is likely to affect their broader engagement with politics and their communities in the future.”

The study will also consider the ways in which young people are responding to and trying to influence Brexit, the consequences of the EU Referendum on UK and devolved politics, the ways in which Brexit has forced young people to reconsider citizenship and identity, and the impact of the EU Referendum and Brexit on inter-generational conflict in domestic politics. To date, many of these issues have been explored in a number of blogs, which will continue to be released throughout the project, offering ongoing expert commentary and analysis of the findings.

The research will be presented and discussed at the project’s conference, Young People and Brexit: One Year On, in London, in June 2017. The event will bring together academics, politicians and young people to consider how the voice of young people should be properly represented as the government negotiates the UK’s exit from the European Union. This follows a successful event held at the Pierhead building in Cardiff last year.

Part of the event will involve screening the research films made with young people. Dr Sioned Pearce said, “The short films draw on visual methodologies to complement the survey findings and gauge the more complex impact Brexit might be having on young people including their intergenerational relationships, adapting their future life plans to Brexit and where they get their political views. We are really looking forward to screening the films in London in June.”