The Assisted Places Scheme was introduced in 1980 by the Conservative Government in order to provide a ‘ladder of opportunity’ for academically able students from poor homes. Over the next 17 years, more than 75,000 pupils received means-tested assistance from public funds to attend the most selective and prestigious private schools in England and Wales. However, the Scheme proved highly controversial. There were claims, for example,  that it damaged the public sector because it ‘creamed off’ academically able students from state schools and sent out a clear signal that private schools were better (see Walford 1987).  New Labour abolished the Scheme when it came to power in 1997, arguing that public funds should be designed to ‘benefit the many, not just the few’ (DfEE 1997). The incoming administration put in place measures, such as the Gifted and Talented scheme (DfEE 1999), to ensure that academically able children would not be disadvantaged by staying within the state sector.

However, the issue of how best to cater for the materially disadvantaged but academically able student never really went away and the return of a Conservative administration in 2010 brought the issue into the public eye again. While the Conservative Party had already abandoned its longstanding support for the return of state-maintained grammar schools, it has been eager to promote alternative forms of provision – particularly free schools and academies. In England, the incorporation of previously independent schools into the academy sector has blurred the boundary between state and private education, but has not resolved the issue of how to achieve the academic ‘press’ associated with selection. In 2010, the prospect of assisted places returned when it was proposed that businesses could sponsor places for disadvantaged children at private schools (Barker 2010).  Last year, the Sutton Trust (2012) launched a campaign to introduce an Open Access Scheme whereby the ‘top’ independent schools would open their doors to academically able students on a fees-blind basis.

This research aimed to contribute to the ongoing debate surrounding these developments by exploring how the benefits and risks associated with the Assisted Places Scheme continue to play out in the lives of its intended beneficiaries. The research built on our ongoing investigations of the Scheme and of the complex relationship between school type, mode of sponsorship and subsequent educational and occupational trajectories. These have been based on a cohort of young men and women who were deemed to be ‘destined for success’ at the start of their secondary education. The sub-sample of Assisted Place holders in the cohort were initially interviewed in the 1980s (Edwards et al., 1989) and followed up at three subsequent points in 1994-8, 2003-4 and 2008 (Power et al., 2003; Power et al., 2006a & 2006b and Power et al 2009).

The broad aim of the research was to explore the long-term impact of the Assisted Places Scheme on beneficiaries’ occupational and social prospects and on their aspirations for their children’s education.

More specific objectives of this project were to: 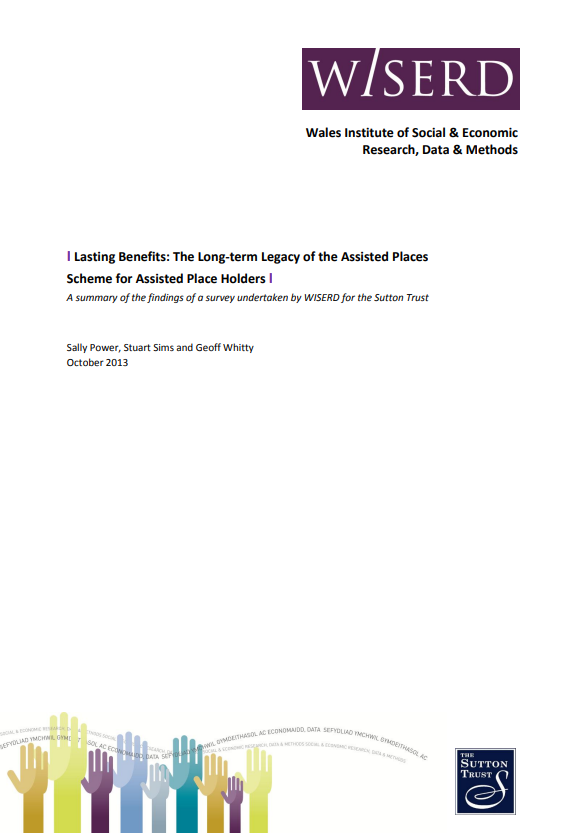 The Assisted Places Scheme was introduced in 1980 by the Conservative Government to provide a’ladder of opportunity’ for academically able students from poor homes. Over the next 17 years,more than 75,000 pupils received means-tested assistance from public funds to attend the mostselective and prestigious private schools in England and Wales. The Scheme proved highlycontroversial and…