The future of work

In recent years, media headlines such as: ‘Robots are coming for your job: and faster than you think’ have become increasingly prominent. Such media coverage derives from research on the future of work and the impact of new technologies and automation, which sets out competing arguments that are widely contested. Some studies argue that over a third of UK jobs are at risk from automation, whereas others provide much lower estimates.

However, it is often assumed that some forms of manual employment and low-skilled, poorly educated young people will bear the hardest impact from future work changes, especially young men. In response to this potential impact, UK and Welsh Government policy often focuses on providing opportunities for lifelong learning, with the aim of upskilling individuals and developing a skilled population, fit for future technological change.

Yet, this raises the question of how you upskill those with a negative or disaffected association with education? If we fail to address this issue, some young men may find themselves unemployable in the future. Therefore, the UK government’s aim of levelling up and the Welsh Government’s Well-being of Future Generations Act goal of creating a prosperous Wales will be unachievable.

My research, situated in a former coalfield community in the South Wales valleys, seeks to contribute to the understanding of such issues. It focuses on the educational experiences, employment aspirations and masculine identity of a group of marginalised working-class young men and considers the impact of predicted future employment changes.

This subgroup of young men has become synonymous with macho, ‘hard’ or ‘laddish’ identities, and is often associated with anti-learning and manual employment aspirations, often linked to structural inequality, the legacy of industrial work, and the inheritance of traditional forms of hard industrial masculine values and beliefs previously essential to physical labour.

As a result, many ex-industrial communities suffer from disproportionally high rates of low levels of educational attainment and a high percentage of people employed in manual jobs.

My research has included a study of a group of working-class men aged 21-37 who had rejected school and education more broadly based on its perceived irrelevance, exploring their employment experiences and relationships using qualitative methods, including semi-structured interviews and visual techniques.

The findings identified some continuity with the current understanding of marginalised working-class men and indicated that community traditions and masculinity influenced the participants’ attraction to manual employment. The appeal of manual jobs was attributed to their physical nature, perceived health-related benefits and participants’ awareness of personal well-being.

The concern for personal health deviates, to some extent, from the health-averse and ‘unhealthy’ practices often associated with certain traditional ideas of masculinity and somewhat demonstrates a change in beliefs.

You can read these research findings in this new publication: 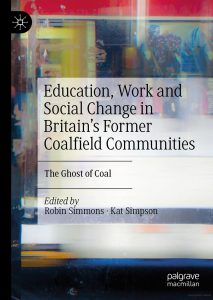 In collaboration with a youth centre, my additional research focused on a younger study sample of marginalised working-class young men aged 12-21, using ethnography and qualitative methods, including semi-structured interviews and visual techniques. The findings revealed elevated behavioural changes and views. Some of these changes included:

1) A pragmatic approach to education instead of anti-learning, whereby the young men selectively identified and partook in a minimal amount of educational topics considered necessary to their employment aspiration, while rejecting those deemed irrelevant.

2) Some softer displays of masculinity and social and emotional skills anticipated to become in demand with future work changes were also demonstrated, including sensitivity, empathy, compassion and physical tactility.

3) There was also some deviation from manual employment orientation that was the consequence of specific social circumstances and what I refer to as a rupturing process or the destabilisation of masculine beliefs associated with physical industrial labour.

The findings allow us to consider the possibility that contemporary marginalised working-class young men’s views and behaviours may be somewhat changing. Therefore, conducting additional research to explore this possibility further, and to contemplate ways in which we can harness and foster the changes is important, with the ultimate goal of working with young men to create programmes and targeted interventions to make them fit for future technological change.

We could then start to think about employment futures other than manual work and the real possibility of delivering on the aim of levelling up, and creating a prosperous Wales that enables everyone to fulfil their potential regardless of their background or circumstances.

Richard Gater is a post-doctoral research fellow in WISERD’s Civil Society Centre. His work focuses on the educational experiences, employment aspirations and masculine identity of marginalised working-class young men in a former coalfield community in the South Wales valleys.

Photo by Possessed Photography on Unsplash