On 25th July distinguished Visiting Fellow, Dr Sarbeswar Sahoo from the Indian Institute of Technology Delhi gave an informative seminar presentation entitled: ‘“The Lord Always Shows the Way!” Women’s Narratives on Conversion and Social Transformation in Rural India’. In the presentation Dr Sahoo analysed why, in today’s India, a large number of tribal women convert to Pentecostalism. Specifically, drawing on ethnographic fieldwork in Rajasthan, he examined what motivates them to make a break with their traditional belief system. 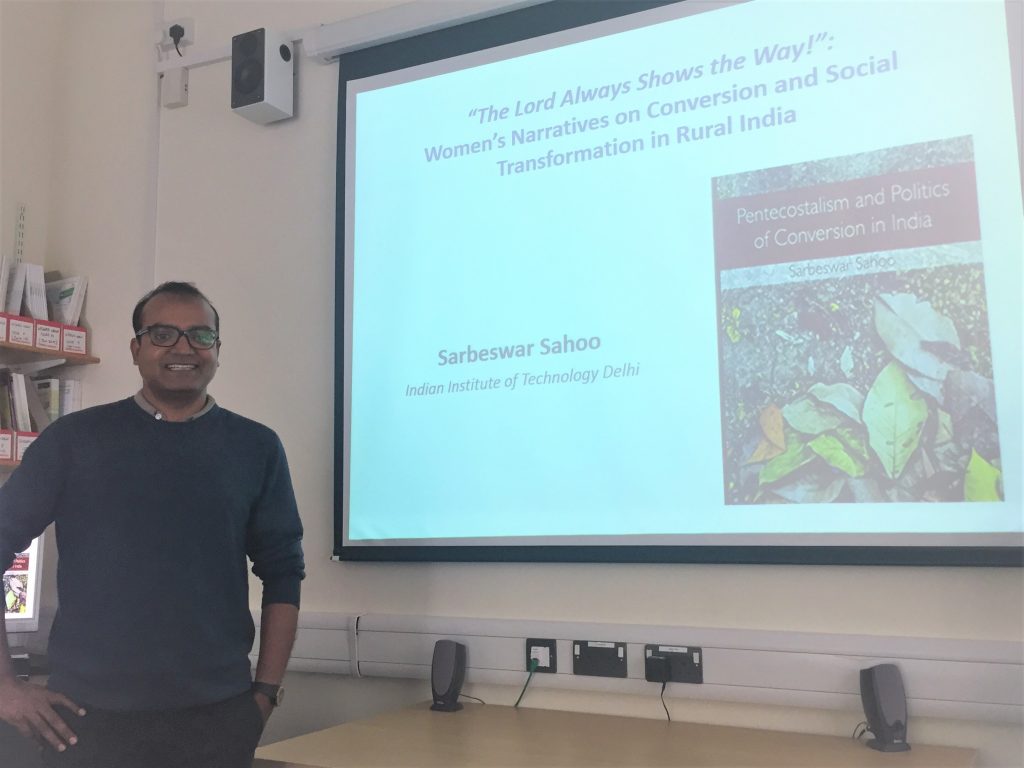 The study findings revealed how Pentecostal churches have made special efforts to address the everyday problems of tribal women, which, in turn, has brought them closer to the church. Moreover, the new data showed how religious conversion is a complex process that cannot be fully explained by a “materialist incentive discourse” (- that is, converting in exchange of some material incentives). Material incentives, though important, were revealed as short-term and temporary in nature. Amongst study participants they were found not to strongly influence women’s decision to convert; not least because converts faced stigma and sanctions from the wider (non-convert), predominantly Hindu population. Instead, Dr Sahoo argued that faith and spiritual transformation, caused by a variety of factors, have played an important role in influencing tribal women’s decision to convert. The new research revealed that the ‘Push Factors’ leading to conversion included: everyday violence experienced by tribal women – as well as illness, poverty, exploitation, hunger, and humiliation. Whereas, the ‘Pull Factors’ included women’s perceptions of Pentecostalism’s miracle healings, hope for improved socio-economic well-being, access to education, greater moral discipline, membership of a community of compassionate believers, and hopes for improved family relationships. A full account of Dr Sahoo’s research is given in his latest book ‘Pentecostalism and Politics of Conversion in India’ (2018 – published by Cambridge University Press

Speaking after the seminar WISERD Co-Director Professor Paul Chaney said: “it is excellent to again welcome Dr Sahoo as WISERD Visiting Fellow and collaborate with him as part of our growing international research programme on the contemporary challenges facing civil society”