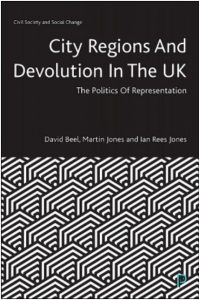 On the 19th of May, WISERD and the Future Economies University Research Centre based at Manchester Metropolitan University, held an online event to launch two books: City Regions and Devolution in the UK and The Political Economy of Industrial Strategy in the UK.

The event featured discussion from the authors, alongside commentary from an esteemed panel, including Dr Arianna Giovannini (De Montfort University) and Professor Kevin Morgan (Cardiff University).

City Regions and Devolution in the UK, by David Beel, Martin Jones and Ian Rees Jones, is the latest in the WISERD Civil Society and Social Change series with Policy Press.

In recent years, the ‘city region’ has seen a renaissance as the de facto spatial centre of governance for economic and social development. This book provides a critique of city-region building and considers how governance restructuring shapes the political, economic, social and cultural geographies of devolution. 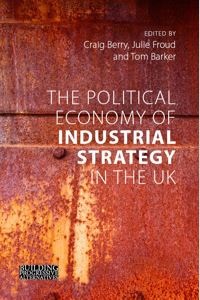 The Political Economy of Industrial Strategy in the UK, by Craig Berry, Julie Froud and Tom Barker, is a collection of essays by leading academics and practitioners, including WISERD foundational economy researchers. It considers the effectiveness of recent industrial policies in addressing the UK’s economic malaise. Does the UK still have an industrial strategy? How should we understand the renewed interest within government in industrial policy – and now its apparent reversal – in recent years?

The book focuses on political and institutional foundations of industrial policy, the value of ‘foundational’ economic practices, the challenge of greening capitalism and addressing regional inequalities, and the new financial and corporate governance structures required to radicalize industrial strategy.