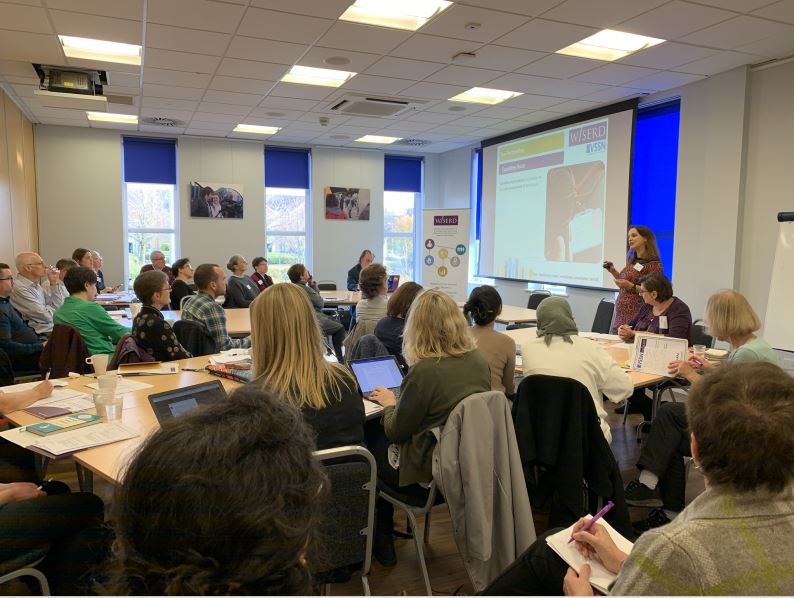 During November, WISERD hosted a joint conference with the Voluntary Sector Studies Research Network, entitled ‘Civil society in the four UK nations: past, present and future challenges’. The day included a diverse range of papers from academics and third sector organisations.

The first session presented research findings on civil society and the state across time and territories. Irene Hardill (Northumbria University) and Rob Macmillan (Sheffield Hallam University) presented ‘Moving frontiers: Voluntary action and social welfare’ exploring and comparing dominant discourses from the 1940s and 2010s on the shifting relations between the state and civil society.

Hannah Ormston from the Carnegie UK Trust introduced the recent report ‘Carnegie UK Trust: The Enabling State’. This compared approaches to public policy-making in the nations of the UK and found the devolved legislatures involved a complex process of learning and dissemination but also enabled generally more favourable developments in Wales and Scotland in relation to civil society than those in England.

Other presentations included analysis of changing governance and voluntary sector engagement in Wales (Amy Sanders, WISERD, Cardiff University) and in Scotland (Jane Cullingworth, University of Glasgow), highlighting the complex trade-offs many voluntary organisations have to negotiate as they seek to influence government.

Rich insights were shared in the panel discussion, ‘Community action in local places – Building leadership and leading change’. James Rees (University of Wolverhampton) highlighted the importance of relational networks within civil society in generating place leadership. This theme was picked up by Dr Sarah Lloyd-Jones, who outlined the Rank Foundation funded project ‘The Llechi, Glo a Chefn Gwlad (Slate, Coal and Countryside) partnership’ which will work with nine community organisations to support the development of local leaders. Finally, within this panel, Sue Denman (Solva Care and Solva Community Land Trust) and Jessie Buchanan (Trecadwgan Campaign Group) provided rich evidence of how community ownership and delivery of social care can grow through local community action.

The initial afternoon panel focused on the ‘politicisation/de-politicisation and/or re-politicisation of children and young people’s voluntary action’ and considered how this group engages in voluntary action. Contributions from Alison Body (University of Kent), Esther Muddiman (WISERD, Cardiff University) and Emily Lau (Canterbury University), highlighted the importance of how we involve children and young people, and its subsequent impact on ongoing civic action. Rich empirical data demonstrated the role of schools and families, in both facilitating and shaping values and action by young people.

The final panel reflected on lessons from practice, with contributions on ‘the impact of government initiatives to end rough sleeping on voluntary sector organisations across England, Wales and Scotland’ (Mike Hemmings, York St John University); ‘Tensions from volunteer befriending inside a British immigration detention centre’ (Joanne Vincett Open University); and ‘Welsh Town Twinning: A future for civil society across borders, or the end of association?’ (Bryonny Goodwin-Hawkins, Aberystwyth University). Joanne Vincett described the tensions negotiated by the volunteers she studied, as ‘quietly advocating’. This term captures a key theme emerging from the day, highlighting how voluntary organisations are continually challenged to find ways to advance their actions while maintaining working relationships with the institutions of government.