This ESRC funded project aims to identify, categorise and compare scales and types of civil society involvement in youth unemployment policy between the four devolved nations of the UK. In doing so it will examine the implications of these differences for both youth unemployment provision and devolved policy arrangements. The broader aim is to critique the notion of ‘one UK welfare state’ and, in doing so, progress our understanding of the impact of decentralisation, devolution and territorial rescaling on welfare state formation across Western Europe.

Youth unemployment is rising as a result of the Covid-19 pandemic and subsequent sector lockdowns in the UK and across the world with 17.5% of young people (aged 15-24) now unemployed across Europe (10.1% in Netherlands, 40% in Spain and 14.5% in the UK, Eurostat 2021). As well as being consistently more likely to be unemployed than any other age group (Eurostat 2020a, 2020b), young people face a much higher risk of in-work precarity. For example, 15-24 year olds are more likely to work part time, often not out of choice (Pay Rise Campaign 2015) and are at higher risk of ‘in-work poverty’  (Hick and Lanau 2018). Currently 35% of young people (aged 15-29) are employed in low-paid and insecure jobs on average across OECD countries, compared to 15% of employees aged 30-50 and 16% of those aged over 51. In the UK, labour market disadvantage is coupled with the rising cost of higher education and a tightening of social security conditionality through Welfare Reform (since 2012) which could be linked to a drop in eligible young people claiming welfare support (Wells 2018).

Civil society organisations (CSOs) play a key role in mitigating youth unemployment and precarity by challenging, shaping and implementing youth unemployment policy (Baglioni and Giugni 2014; Giugni et al 2021) and performing advocacy and delivery roles. Where welfare provision is contracting, as it is in the UK, a mixed economy of welfare is more likely, thus emphasising the role of CSOs. Concurrently more studies of welfare provision to date are pitched at national, supra-national, federal or local/city levels of governance, with little attention given to devolution date (Esping-Andersen 1990; Taylor-Gooby 2004; Wallace and Bendit 2009; Pierson 2011).

This research will take advantage of the UK’s unique, asymmetrical devolved arrangements to address the identified gap in research examining the role of CSO in youth (un)employment under devolved systems of governance. It will provide an internationally-salient analysis located in the global phenomenon of state reconfiguration, the emergence of sub-state welfare regimes and the adoption of welfare pluralism. It will do so by examining and comparing variation in youth unemployment activity among civil society organisations at the ‘sub-state’ (or devolved) levels of UK governance.

The research specifically undertaken in Northern Ireland, relying on a combination of different qualitative approaches (in-depth interviews with selected informants; records and document analysis) and employing a validation strategy called triangulation that involves the simultaneous adoption of multiple data sources and collection methods, has highlighted how Northern Ireland represents a place apart compared to the rest of the UK. It was consequently necessary to first historicise the context in which youth work took place in Northern Ireland, which also fills an academic gap into the existing scholarship.

Initiatives in the field of youth unemployment, over the years, have been mainly undertaken by Civil Society Organisations (CSOs): these have been the glue holding Northern Ireland together and their role in this field cannot be disentangled by the multidimensional context of conflict and division. Interviews with CSOs representatives, politicians and former political prisoners have all highlighted the root causes of this specific tendency in relying much more on the voluntary sector than on the State’s structures: CSOs are the only groups perceived by both communities as trustworthy enough and able to take care of the community’s most basic needs. 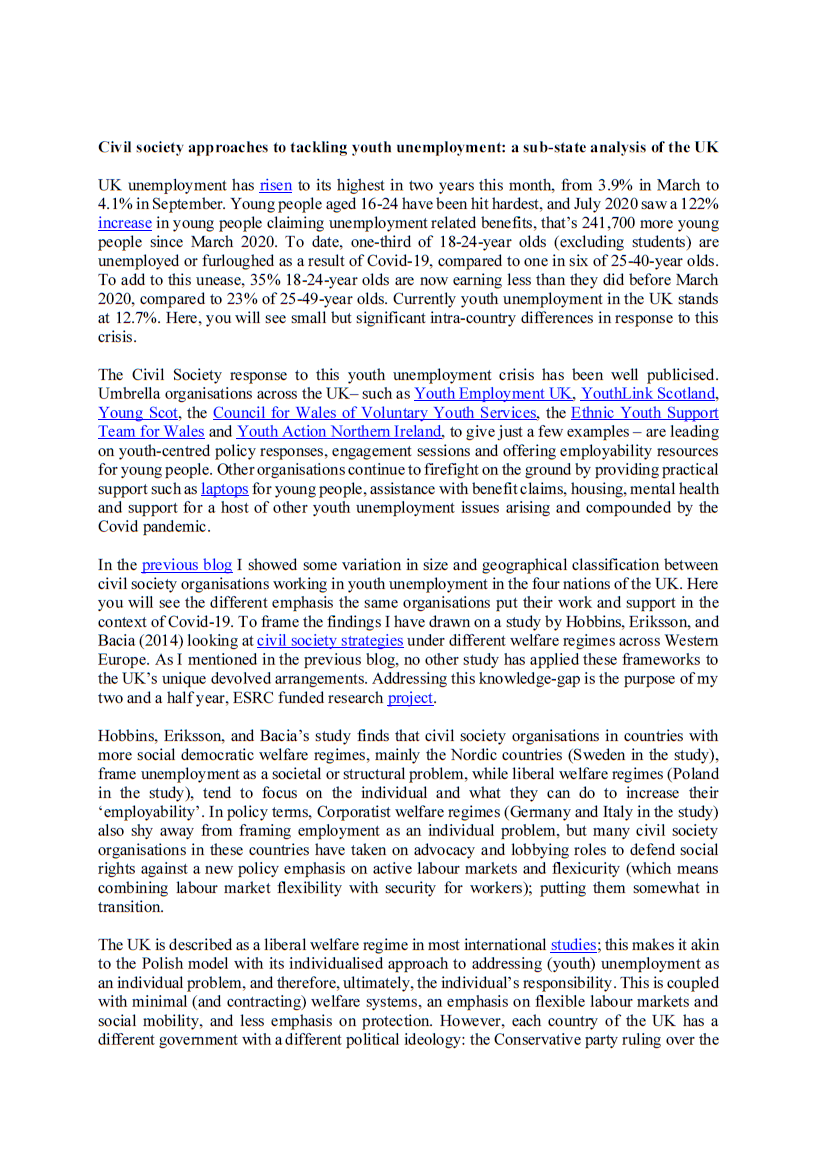 Reports and Briefings
Civil society approaches to tackling youth unemployment: a sub-state analysis of the UK

Dr Sioned Pearce highlights the impact of COVID-19 on youth unemployment. In an interview with BBC Wales, she said the pandemic had “exacerbated issues of uncertainty” for young people with zero hour contracts, part-time work and low-paid jobs.

UK unemployment has risen to its highest in two years this month, from 3.9% in March to 4.1% in September. Young people aged 16-24 have been hit hardest and, to date, one-third of 18-24 year olds (excluding students) are unemployed or furloughed as a result of COVID-19, compared to one in six of 25-40 year…

Early data suggests 15% of people in the UK have now lost their jobs due to Covid-19. Hidden within this figure is the disproportionate impact on already marginalised and disadvantaged groups, including black and minority ethnic people, women and those without a degree. Young people are also at the sharp end this surge in unemployment, as…

This online event looks at the research undertaken on involvement of civil society organisations in youth unemployment policy and provision across the four devolved nations of the UK with Civil Society Organisations (CSOs) representatives, actively involved in implementing and coordinating youth unemployment programmes and initiatives. The session will briefly outline the theoretical overview on…