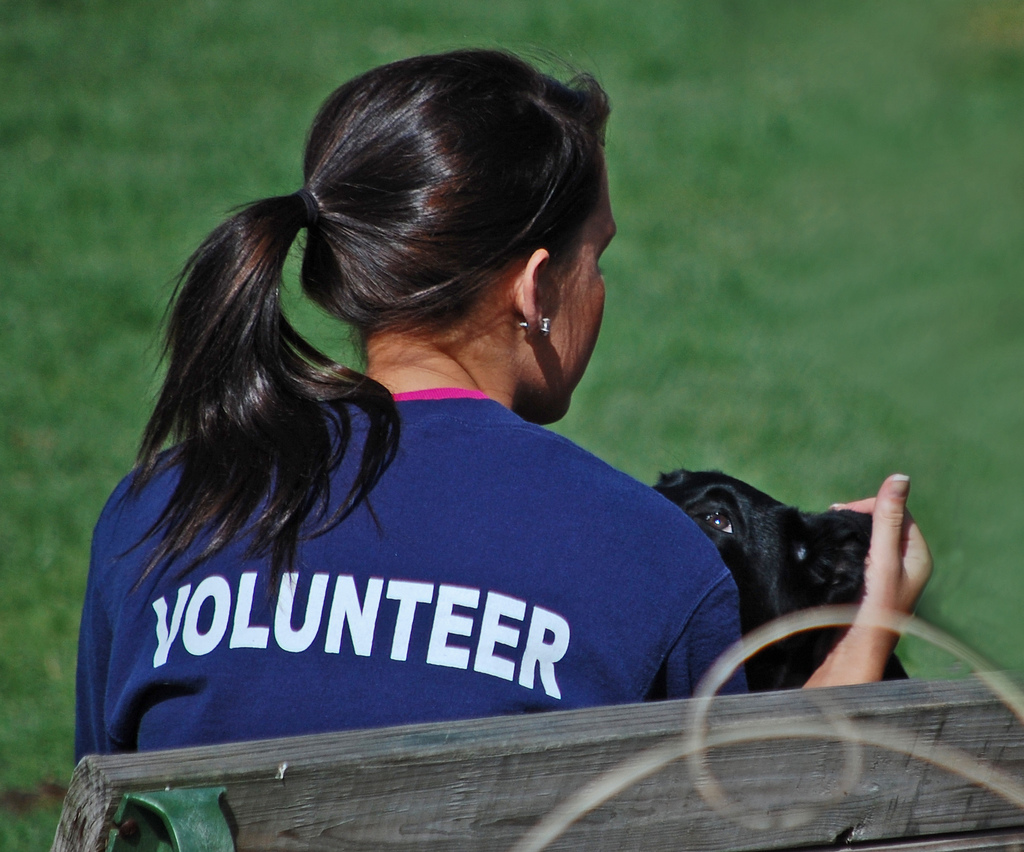 When we talk about the benefits of volunteering this is usually in relation to young people. Most organisations promote volunteering opportunities to young people; ‘good news’ stories in the media about volunteering focus on the activities of young citizens; and government interventions to increase participation are usually focused on school initiatives (such as the Welsh Baccalaureate).

Some argue that this reflects young people developing different methods of interacting with their communities. These methods place more emphasis on activities that give the individual greater control and freedom to choose what they support (such as volunteering to raise money for a charity), and less on traditional activities that are less expressive and involve supporting traditional institutions (such as voting). Others argue that this simply reflects policy changes in education, in which volunteering is a more prominent component of school curricula (as in Wales), and an important means of gaining entry to desirable universities.

While it’s difficult to identify exactly why someone volunteers from the Understanding Society survey, we can use it to shed some light on the question of how active young people are as volunteers compared with their elders. In addition, because the sample for the survey is far larger than other surveys of volunteering, we can take a more detailed look at how volunteering varies by age through using smaller age-groups than the traditional ‘18 to 24-year-olds’ etc. The graph below shows the proportion of people over the age of 15 who reported volunteering in the 2014/16 wave of the survey, and how frequently they did so.

The data shows that young people are, indeed, more likely to volunteer than their elders in the UK, however this is only really true for those aged 15 to 17. In an earlier blog post, I reported that Understanding Society showed around one in five people under-25 to have reported voting – roughly the sample proportion as those over-25. The more fine-grained view in this graph, however, shows that this obscures the fact that the very youngest people in the survey were the most likely to volunteer. Only 22% of 18 to 21-year-olds, and 17% of 22 to 25-year-olds, reported doing so, and the 26 to 30-year-olds (15% of whom volunteered) are the least likely to have done so of all. Volunteering, then, gradually increases with age, and peaks again (though not quite at the level of the 15 to 17-year-olds) among those aged 61 to 65.

Figure 1: Frequency of volunteering by age 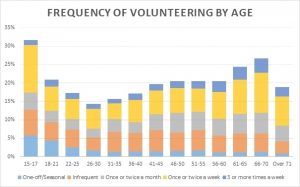 The graph also shows that intensity of volunteering varies, suggesting that young people prefer less frequent forms of volunteering. Recent research has documented the rise of ‘episodic volunteering’, in which people volunteer for a limited time in support of a cause they are particularly interested in. This is in place of more sustained commitments to organisations for which volunteering is an important activity.

Consistent with the growing tendency of young people to develop weaker links with community-based organisations, it has been suggested that young people are most likely to be ‘episodic volunteers’. The graph suggests this could be right but that differences are small. Around 40% of 15 to 17-year-olds, for example, (and around 43% of under-25s) volunteered as a ‘one-off’ or infrequently, compared with around 25% of those aged over 55. Conversely, only 5% of 15 to 17-year-olds (and 7% of under-25s) reported volunteering at least three times a week, compared with around 15% of the over-55s.

There isn’t much evidence in support of a substantial shift in the nature of volunteering, or to suggest that patterns in the intensity of volunteering vary much between different age groups. However, in terms of how many people are volunteering and whether young people are more likely to have greater access to the benefits of it, this data is encouraging.

Young people – particularly those in full-time education – are more likely to volunteer than their elders. Once they leave school or sixth form, however, volunteering becomes less common and they differ little from their elders. This suggests that school-focused initiatives to encourage youth volunteering, and/or the inclusion by universities of expectations that prospective students engage in voluntary activity, have been somewhat successful.