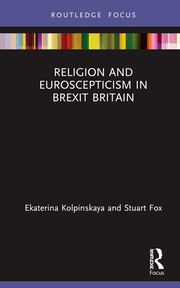 With all eyes on the results of the ‘Super Thursday’ elections, much has been made of the differences in the electoral fortunes of political parties in England, Scotland and Wales. Indeed, the strength of the Conservatives’ performance in England was not replicated either in Scotland or Wales – with the SNP dominating the former and Labour the latter.

The fact that the Tories’ success has been largely explained through the Brexit lens and linked to their increasing appeal in Leave areas, implicitly suggests that such an appeal is either weak or non-existent in Scotland, the most pro-Remain part of the UK, and more surprisingly Wales that did vote to leave the EU in 2016. Hence, the three countries of the UK seem strikingly different from each other with regards to their levels of Euroscepticism and factors that underpin it.

In reality – as we show in our book Religion and Euroscepticism in Brexit Britain – Eurosceptic attitudes in all three countries are driven by mostly the same factors, and the differences in visible manifestations and presence of Euroscepticism are determined by differences in party systems and political and social contexts.

In particular, holding an English – rather than British, Scottish or Welsh – national identity is both more widespread in England than west and especially north of the border and is a powerful driver of Euroscepticism. This is not the least because it decreases one’s tolerance for immigration, which too makes one more supportive of Brexit.

Such an English-centric mindset resonating with Theresa May’s  sentiment that ‘a citizen of the world [is] a citizen of nowhere’ also goes hand-in-hand with stronger adherence to traditional social values that dampen one’s support for immigration and boost one’s Euroscepticism.

In all three countries, these factors overpowered the more traditional left/right economic divide and transcended party lines, though identifying with the Conservatives did make Scottish voters a little more Eurosceptic in Scotland, while identifying with Labour had the opposite effect in Wales.

So, while the ‘Brexit was made in England’ argument is true when one looks at electoral outcomes, the nature and drivers of Euroscepticism in England, Scotland and Wales are very similar – with the differences in visible presence of Euroscepticism being determined by difference between their populations, as well as political contexts.

The religious make-up, in particular, varies rather dramatically between the three countries, and the effects of religion influence political ideology, including social conservatism, attitudes towards immigration and national identity, especially when it comes to identifying with a national church such as the Church of England or the Church of Scotland.

Such voters – Anglicans in England or Presbyterians in Scotland – are far more likely to be critical of both the idea and practice of EU membership because of their propensity to be socially conservative (and a lesser extent, to be more right-wing), to reject a transnational European identity and (in the case of Anglicans) to hold an English national identity that has become ‘a cluster point for other attitudes and concerns…[including] hostility to European integration’. These two groups are the mirror image of each other on the two sides of the Anglo-Scottish border – and the most stalwart Eurosceptics in their respective countries.

While the effects of Catholicism in all three countries are generally weaker than those of Anglicanism or Presbyterianism, identifying as Catholic usually increased Euroscepticism – with the notable exception of Wales.

Overall, the makings and predictors of Euroscepticism are much the same in England, Scotland and Wales. However, the greater presence and concentration of certain groups of population who are more likely to hold characteristics that associated with greater Euroscepticism such as traditional social and right-wing economic values, anti-immigrant sentiment and English national identity. Hence, the effects of Catholicism are rather minor, as the 5.7 million strong community is not geographically concentrated in Wales to have made much difference in the 2016 Referendum and beyond.

Unsurprisingly, the Euroscepticism of Presbyterians has little bearing on the overall pro-EU reputation and electoral outcomes in Scotland – trumped by the pro-Remain rhetoric of the SNP and the Scottish Labour Party, in contrast to the role of Anglicans in England that resonated with the Euroscepticism of the Conservative Party both before and after the 2016 Referendum.