Characteristics closely linked to educational outcomes can vary by individual pupils’ situations and can be the result of a complex interplay between a number of risk factors. For example, being classified as having a disability such as communication difficulties, and experiencing behavioural and mental health problems can increase the risk of losing school days, which might  co-occur and overlap with other family-level issues,  putting the child at further risk of exclusion.

Though there is an established link between the presence of special education needs (SEN) and the likelihood of experiencing disruptions in their education, little is known about how different types of SEN might be perceived and thus categorised across pupils’ educational trajectory.

Furthermore, as pupils are usually categorised as either having SEN or not, the presence of multiple types of SEN, suggesting the role of complex and co-existing health care needs remains unclear in relation to negative or disruptive experiences.

This blog post follows up on the analyses implemented for my previous blog post, utilising data on “primary” and “secondary” special education needs (SEN) identified among pupils in Wales. Although a maximum of two SEN types are recorded at any time, the types of prioritised need are revised and updated annually, to reflect changes over time. Here, we included all types of SEN, both a pupil’s “primary” and “secondary” SEN type, identified during the study period between 2009/10 and 2016/17 by following 476,775 pupils as they progressed from key stage 1 to key stage 5.

We investigated each SEN type identified during the study period, separately as either “primary” or “secondary” need for each pupil (as defined by the level of need and support required). We further explored how the identification of each type of need, both as a “primary” and “secondary” need, may vary across different educational stages.

With the aim to investigate how the level of need might vary across different pupils, we examined what proportion of those with a specific SEN type have ever been classified as having a “secondary” need. In our sample, 65,021 (13.7%) pupils had at least one SEN. Of those pupils, 20,438 (31.4%) also presented with a “secondary” SEN. We then examined how often each type of need is perceived as “primary” or “secondary” for each pupil (Figure 1). A greater proportion of learning needs were identified as “primary” needs while a greater proportion of physical needs were identified as “secondary”. These include individuals with general learning need, of whom 88% had it assigned as a “primary” SEN, while 12% had it assigned as a “secondary” need. In the case of sensory difficulties, 70.3% had it as a “primary” SEN (versus 29.7% as secondary), potentially suggesting that learning needs might have a more disruptive effect on the pupils’ education and thus being categorised as the “primary” need requiring support.

Figure 1. Variation between “primary” and “secondary” needs identified by type of need 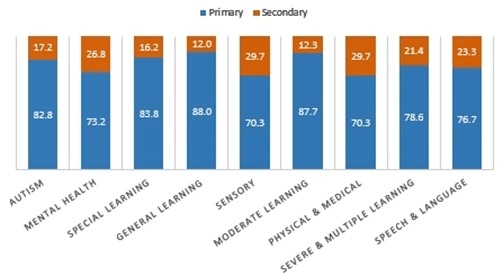 We also explored whether there was a variation in the frequency of the two different SEN types by key stage of identification (Figure 2). Learning needs were identified as “secondary” needs in early key stages while being increasingly identified as a “primary” need in later key stages, with examples like special learning needs (KS1: 15.9%; KS5: 9.5%), while the opposite variation was observed for speech and language needs (KS1: 17.8%; KS5: 47%). A number of SEN types including mental health needs were consistently identified as “primary” needs across key stages. This could indicate that certain types of need may have a constant disruptive role in education but it could also be linked to the level of skills which children are expected to have at different developmental stages. 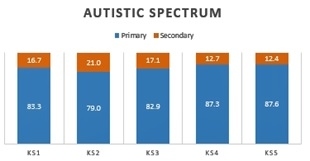 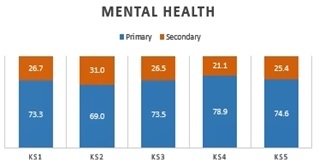 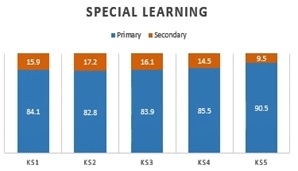 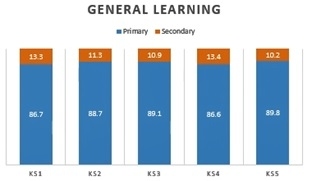 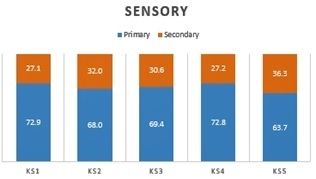 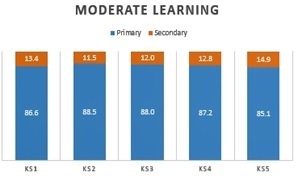 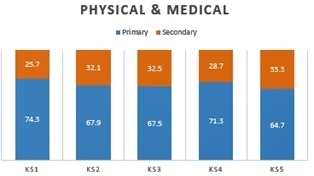 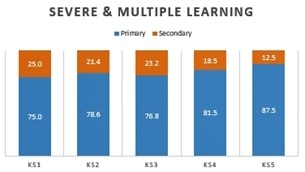 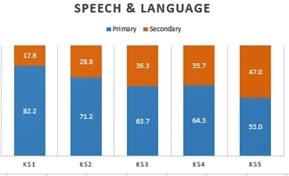 Overall, it’s clear that the impact of SEN on the pupil can vary significantly by the level and complexity of need. That link was highlighted by the fact that different types of need, including learning and behavioural needs, were identified as the pupil’s “primary” need requiring support, suggesting that children with complex needs can differ both by the type and stage at which each need is identified.

We are planning to investigate the association between different patterns of special education needs and school exclusions. The next blog post will also explore how experiences of school exclusion might vary based on the timing of SEN identification and the presence of complex needs.

Photo by Anna Nekrashevich from Pexels.