In October 2022, the Welsh Government announced that anti-racist professional learning would be mandatary for all school teachers in Wales as part of its Anti-Racist Wales Action Plan. Evidence from the latest sweep of the WISERD Education Multi-Cohort Study (WMCS) suggests that such universal and compulsory training is badly needed.

In the summer of 2022, we asked 1,100 pupils attending a representative sample of schools across Wales about the extent to which they are encouraged to discuss issues of race and racism in their school. As Chart 1 below shows, nearly half said that they are encouraged to discuss these issues. However, one fifth disagreed, and nearly one third did not know, which perhaps indicates if there were discussions they were not particularly engaging or challenging. 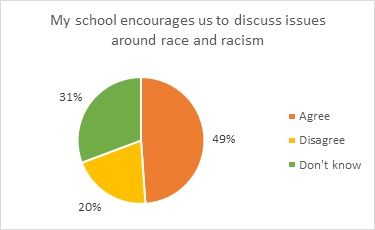 We also asked these pupils whether they had discussed the Black Lives Matter movement in their classes at any point in the previous year. We were particularly interested in this as the previous year’s survey (Sweep 9) had shown that this was a social movement which pupils felt very strongly about. Over two-thirds had said that racism was the one issue they thought about most often and many had taken part in the Black Lives Matter demonstrations.

In this latest survey, over half the pupils (51%) said that they had discussed the Black Lives Matter movement at some point in their classes in the previous year. However, there are wide school-level variations. As Chart 2 shows, the Black Lives Matter movement was nearly nine times more likely to have been discussed in School J as in School A. To some extent, this wide variation reflects the different ethnic profile of the schools, but this just raises further issues about the extent to which teachers in schools with few Black, Asian and Minority Ethnic (BAME) pupils feel confident or comfortable discussing issues of race and racism – or indeed feel it is even necessary. 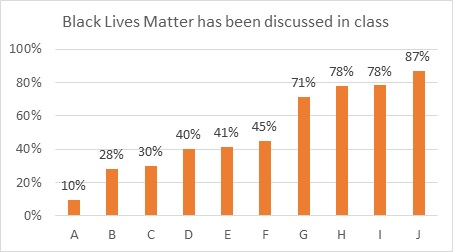 As Chart 3 below shows, Black, Asian and Minority Ethnic pupils were more than twice as likely to disagree with the statement that their school takes reports of racism seriously.

As with discussions in class, there is significant school-level variation. Chart 4 shows that in School A, fewer than half (44%) of the pupils think their school takes reports of racism seriously, compared with over 90% of pupils at school H. Comparison of Charts 2 and 4 indicates that there is some relationship between pupils reporting discussions on Black Lives Matter in class and their perception that reports of racism are taken seriously. School A features at the ‘bottom’ of both charts, while School H features near the top end of both. 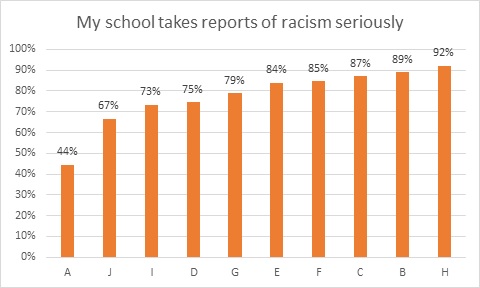 Clearly the relationship between discussing issues of race and racism in school and dealing with racist incidents is complex. Nevertheless, the latest findings from the WMCS indicate that there is work to be done if all pupils in Wales are to understand and feel able to discuss issues of racial injustice, and to feel confident that racism will be tackled in their school. It will be important to see whether the measures being put in place by the Welsh Government make a difference in future years.

Photo by Taylor Flowe on Unsplash.