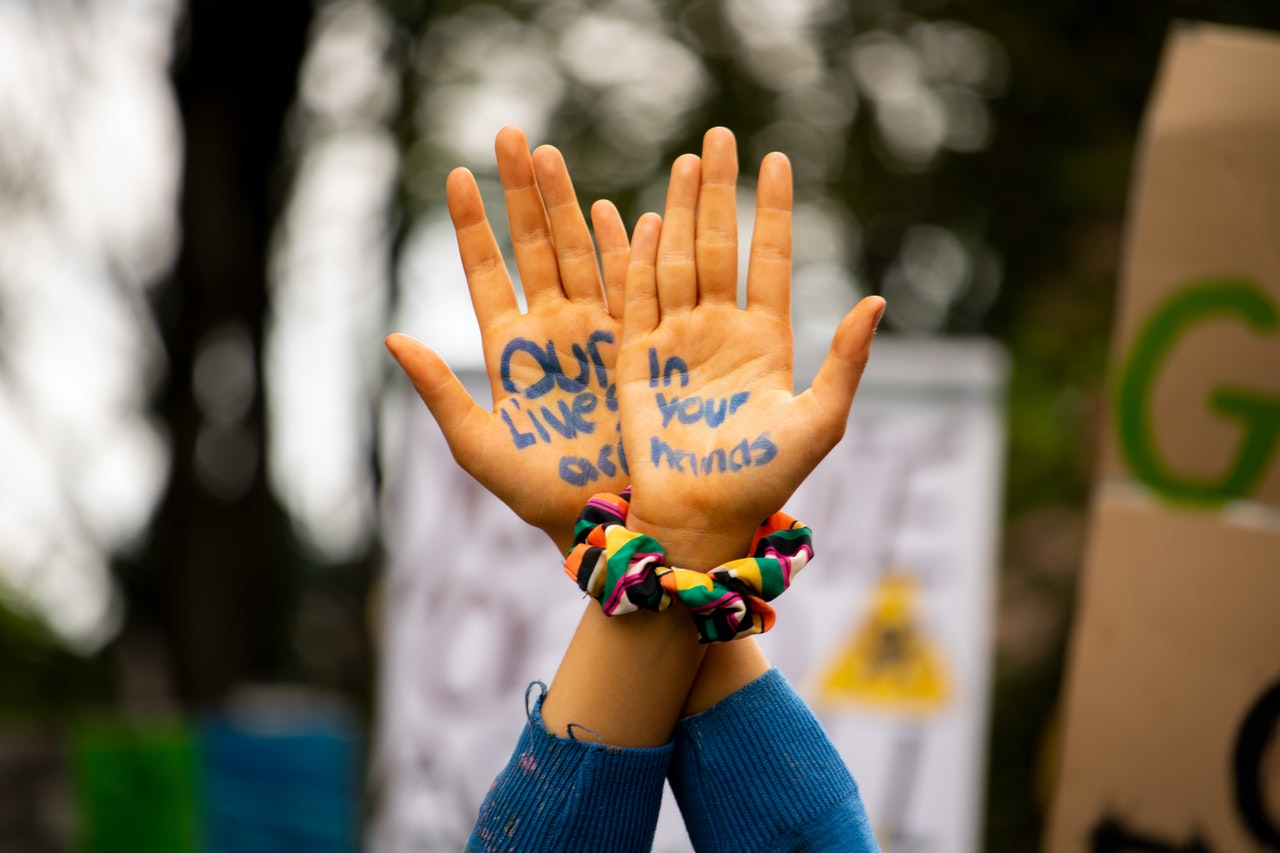 During the recent G7 summit in St Ives, hundreds of protesters gathered to participate in demonstrations and activities about environmental issues.

One of the most prominent images in media reports of these protests is of two children on the beach, with a colourful sign reading ‘no one is too small to make a difference’. The popularity of this image raises some interesting questions about the role of children in public protests and campaigns.

Making space for children to have a say in things that affect them is a key part of the UN Convention on the Rights of the Child (signed by many states/countries since its creation in 1989). Many organisations and figures concerned with children’s rights (eg, UNICEF, Children’s Commissioner for Wales) engage with children to help amplify their voices and enable their participation in civic and political decision-making,

Our WISERD research explores the enactment of children’s rights, and the tensions and challenges that arise when seeking to enable children’s participation. In this blog, we outline three key issues.

Intra-generational issues: whose voices get heard?

In facilitating the involvement of children in social, cultural and economic issues, there is a danger that only some children and some voices are heard by decision-makers. Parents, teachers and other adults often play a gatekeeping role in facilitating or blocking children’s engagement, and some children (or groups of children) may have more opportunities than others to get involved.

A risk of focusing on generational or age-based identities when we think about rights is the homogenization or stereotyping of an age group around cultural norms that may silence marginalised voices and experiences.

Existing research on children’s rights has considered how to engage ‘hard to hear’ groups of children and young people – including ethnic minorities, looked after children and traveller groups – in order to tackle inequalities and issues of inclusivity. The views and priorities of children from different backgrounds and in different circumstances are likely to vary, so it makes sense to consider children’s voices as plural instead of one unified or singular ‘voice’.

Our research  will consider Lockwood’s ‘moral’ and ‘material’ resources, to investigate whether children’s participation is stratified according to social class, amongst other things.

What role do adults play in facilitating children’s engagement?

Critics of the move to engage children and young people politically argue that children may not have the capacity or desire to engage in social or political issues or that their ability to participate will depend heavily on their parent(s)/carer(s). The children featured in the photo referred to above are identified as Farrah (age 2) and Grey (age 8), a brother and sister who travelled to the protest from Bath with their mother. It seems obvious that Farrah and Grey would not have been able to participate without the permission (and resources) of their mother.

This raises questions about children’s agency and understanding of their participation in protests and campaigns. At what age are we confident that children understand their involvement in these activities? And what does appropriate consent look like? Aoife Daly has identified a number of ethical tensions and considerations around the involvement of children in protest, in terms of their particular vulnerabilities and the need for appropriate safeguarding.

We are also interested in how ideas about childhood may be drawn upon by adults to help support causes that they care about. If, in order to realise their rights and promote broader social change, children need adult ‘custodians’ or facilitators’, then this raises questions about whose agenda is being put forward, and whether this constitutes the exercise of children’s rights or the indirect operation of an adult’s priorities and values with the child as a conduit.

Our project will explore issues of cross-generational solidarity and the negotiation of rights and responsibilities between children and adults – and what might happen when children’s and adult’s rights are in tension with one another.

It is hard to know exactly when childhood ends, as it is defined differently in various legal and social contexts. The legal age thresholds for smoking, drinking, driving and voting have all changed over time as our ideas about childhood, protection and responsibility have evolved. Changing ideas about child- and adulthood also informed the recent lowering of the voting age in Wales. These changes are often accompanied by public debates concerning the capacity, competency and vulnerability of children.

Our initial analysis of case study data indicates that when adults draw on children’s rights or issues, they tend to focus on younger children – those who still require adult supervision – rather than on teenagers, who might be seen to be able to advocate more effectively for themselves. This raises the important question of  where children’s rights end and adult’s rights begin? This is something we’re looking forward to exploring throughout our project.