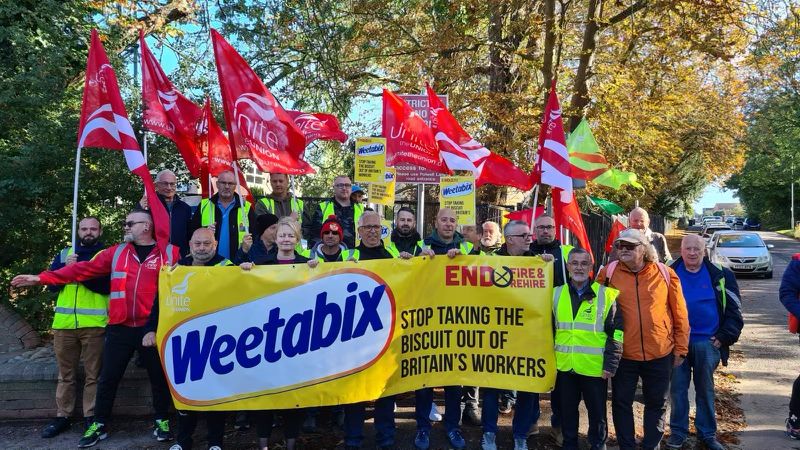 In this third and final part of my blog series exploring the recent election of new Unite leader, Sharon Graham, I’ll be focusing on leverage campaigns and how they work. As a highly contentious topic, they form a key part of Graham’s strategy for organising Unite into a union of “strike ready workplaces”, but are they enough on their own to ensure a successful industrial strategy?

When I interviewed Sharon Graham a few years ago she explained what she meant by “leverage” campaigns, which a senior Tory described as “sinister” and about which the government commissioned the Carr Review in 2013 to report on the “alleged use of extreme tactics in industrial disputes, including so-called ‘leverage’ tactics”. To the government’s disappointment, the report was unable to show that Unite were breaking the tight constraints of industrial action law. Graham says that leverage is only used against particularly aggressive employers who are unwilling to negotiate and where the union is not in a position to use traditional methods of industrial action to persuade the employer to come to the bargaining table:

“And so therefore this was developed to say look, if employers are sacking stewards as a way to get the union out, and take the head off the union, and we can’t respond in our usual way, there must be another way to respond to that.  And this is where leverage was born.”

Eight of the first ten leverage campaigns were about the victimisation and dismissal of shop stewards and as she points out:

She pointed to one of the leverage campaigns where

“…what I was saying to the stewards at the time is look, obviously the go to action is strike action, but if it’s not working, if you’re not hurting the employer, because the whole point of strike action is you withdraw your labour and then the employer feels that. If you’re withdrawing your labour and they’re putting other people in and they don’t feel that, the only people hurting is us.”

She explained that a leverage campaign is “the nuclear option” when all else has failed. It is very resource intensive and can last for months with dozens of staff members deployed to work on it. An initial six-month plan is developed which includes an arc of escalation so that at every point, the employer knows that the pressure will intensify unless they are prepared to deal with the issue at hand. She drew a distinction with a campaign that focuses on “pinch points” in a company’s supply chain and placing pressure on these. For example, the docks are often seen as a pinch point for firms importing parts or raw materials.

She described a “pinch points” campaign as “not multifaceted enough” and argues that hostile employers build work-arounds to avoid being vulnerable to such an approach:

“…if an employer really wants to take us out, they’re going to have planned for industrial pinch points… If the employer took that away, where’s our campaign now?  They’ve got to feel, I mean the employer has to feel that we’re almost enveloping them…”

Leverage is much broader and deeper. She calls it “going wide”. It’s a 3D approach that examines the company in depth, their directors’ other directorships, their shareholders, their clients, their suppliers, the shareholders of their clients and suppliers, their creditors, likely future clients, their emerging markets, the political structures in which they are located, the communities within which they operate, the key analysts in their sector. It isn’t just research however; it’s about applying pressure involving a variety of options, ranging from ads to briefings to strikes. And this all happens simultaneously, hence the heavy resource implications. The union develops a narrative to highlight the central issue at stake – sacking of stewards, blacklisting of union members, breaches of agreement etc –  and ensures that this runs through the core of the campaign and that the company knows that the union is there for the long haul –  “we never ever pull the leverage until the deal’s done, ever.”  She explains how it works using a specific (unnamed) example where Unite went to firms that worked with a targeted design company and told them:

“this design company are black listers, that’s the way that they treat workers. And you are connected to these people because you do business with the people that work with them. This is a toxic company, you do business with a toxic company. Now we are going to associate you with that toxicity, we’re going to tell your shareholders about that. And the biggest thing we do is have meetings with analysts.  So the meetings with analysts that we have, which is why it’s probably more brains than brawn… because obviously analysts aren’t employed by the company but they do have power about share price.”

It’s important to distinguish leverage from the sort of “name and shame” campaigns relying on brand vulnerability (as Naomi Klein put it) that some NGOs engage in with large transnationals. Leverage is not based on trying to engineer embarrassing media coverage for the company (although that might be a by-product):

“…it’s important to say this bit.  It’s almost like we almost don’t have a press strategy for this leverage. It’s quite interesting, because actually I don’t really care whether it’s in the press or not… if it’s in there great, if it’s not it doesn’t, it’s the least of my worries.  Because what these things have in common is they are businesses, and they are profit making… I mean a high street name obviously gives you a bit more… But what we’re doing is old fashioned follow the money…”

She doesn’t look for media coverage or warm words of support – “sometimes I don’t want a solidarity letter, what I need is particular type of actions outside a particular place.” This could be in the UK or abroad and the action could be taken by Unite members or officers or by sister unions in another country, working with Unite.

Not every situation or every problem results in a leverage campaign. Graham points out that it is essentially designed for when other options don’t work and although there are many requests for leverage campaigns from parts of the union:

“We push a lot back because there are things that should be won by collective strength, and if you use this too much instead of that, then you weaken the union at the end of the day.

…we wouldn’t use it for pay rises.  We don’t use this for things like pay, because you want the unions, strike ready workplaces to deal with that sort of thing.”

Leverage is not an isolated tactic. It is an integrated part of an industrial strategy. It is used when traditional methods such as strike action are unavailable or counter-productive:

“…the leverage without the broad industrial strategy, without the sector in itself I think, on its own I don’t think it’s a good thing, because in a sense it’s like charging in on a white horse type thing.  But linked into the building of the union in strike ready workplaces.”

The stewards have to be closely involved with any leverage campaign. They have to feel that it is their campaign, not something imposed from outside:

“Because they have to vote for that, because if that’s not what they want then we shouldn’t do this…”

The aim is to use leverage to transform weakness into strength and to build a strong workplace presence and high density that does not require a leverage campaign in the future. She provided an example of one giant Japanese transnational that had sacked a leading Unite representative:

“the steward had been walked off the site, marched off the site, and the density was not [good], the density now, as a result of that campaign over 1,000 members came into the union by the way.  So to be honest with you action always creates membership…”

“…went from a very low density, less than 30%, way up to 70%, 80%, because what they saw was the union was effective, it can protect its stewards, it can just sort that stuff out.  So that in a way helped, and now obviously we’ve never had to go back there again. The stewards have dealt with it… they’ve been on strike since, they’ve done a whole range of different things since then.”

The industrial strategy is designed to apply to all parts of the union’s work in organising, including on issues like automation and the changing nature of work. She argues that all of these questions require not just an industrial response but also a political response needing a “a 21st century workplace industrial manifesto”. She pointed out that often the lay members understand the urgency and necessity of the approach “quicker than anybody else, because they can feel it and see it.”

She ended the interview by outlining how the union wins and grows:

“For me action builds a strong union.  If people can see us doing things.  I’m talking about taking action, direct action, strike action.  That’s what gets the members in the union mostly.  And as long as we don’t lose sight of that, and don’t become risk averse, then we should be all right.”

Why Graham’s election matters is because the most important union in the UK and Ireland is now led by somebody whose strategy is focused on the workplace: raising the bar where the union already has a solid basis, strengthening it where it is currently weak, and building it where it has yet to gain a foothold. Time will tell how successful she is in steering Unite into a union of “strike ready workplaces” linked through sectoral shop stewards combine committees.

But now that she is general secretary and in a position to push on with her vision of the future of Unite, there will be some nervous conversations in company boardrooms and government corridors.