A global demographic shift means that an ageing population creates an unprecedent demand for adult social care. We live in an era when, for the first time, the number of older people (60+ years) will exceed younger people1. In the UK this challenge is magnified by the effects of austerity and welfare state capacity.

New research by WISERD Co-Director, Professor Paul Chaney, studies the political response to what the UK Prime Minister has called a “crisis in social care”2. Attention centres on political parties’ competition to attract voters’ support as they seek a mandate for their diverse manifesto pledges on care delivery in Westminster, Scottish and Welsh and Northern Irish elections (1998-2019). This research is significant because, although adult social care is a politically-charged issue, the electoral politics of it has previously been overlooked in academic work.

Adult social care in the UK

Adult social care refers to non-medical support to adults in need, typically arising from old age. In the UK, the number of 85+ years individuals with complex care needs is expected to increase in the next two decades. In England alone, recent estimates suggest that there are 940,000 people with dementia. This is predicted to increase 57% by 2040. According to the latest UK parliamentary report: ‘The case for making a sustained investment in social care has never been stronger… We urge the Government to now address this crisis as a matter of urgency… An immediate fuding increase is needed to avoid the risk of market collapse caused by providers’3.

In response to the increasing demand for adult social care across the nations of the UK, political parties have increased their attention to it over successive elections:

The impact of devolution on social welfare in the UK is leading to geographically distinctive and contrasting approaches to adult social care across the four nations. This study tells us about the importance of language in electoral politics and how parties seek to persuade voters to back their policies. It underlines the inherently political nature of policy issues like adult social care.

In England, policies have a greater emphasis on market-based solutions which contrast with the mixed economy of welfare approaches of the dominant Left-of-Centre/ civic nationalist parties in Wales and Scotland.

To read the research findings in full: 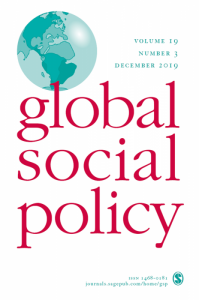