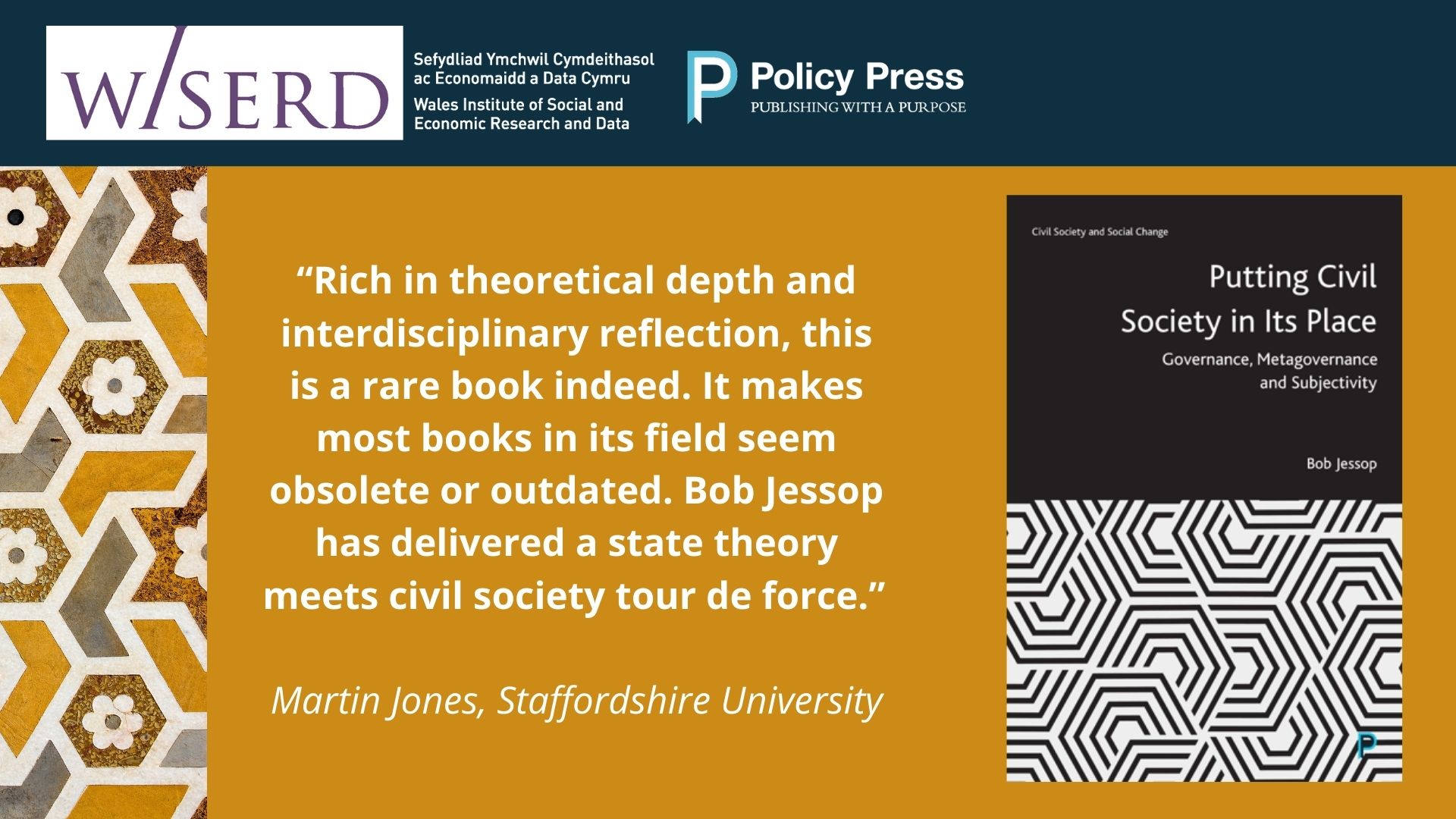 Civil society forms an important element in the Enlightenment trinity of market-state-civil society and has been well studied, with authors attempting to trace its genealogy in political, economic, and social theory. But this approach did not match the concerns of those within the WISERD Civil Society ESRC research centre. Instead, I interpreted civil society as a shifting horizon of action and studied it as a pluralistic ensemble of governance or governmental arrangements with diverse agents.

Particularly, I wanted to specify the distinctive contribution of civil society to governance in terms of the mix of networks and solidarity on which civil society organizations and actors relied. I also wanted to understand the contemporary roles of civil society in promoting individual and collective self-responsibility to lighten the governance burdens of local and central states. And, in contrast, to look at how civil society can facilitate collective self-emancipation through social innovation, community mobilization, and creating the commons to escape the constraints of market and state.

In exploring these issues, I drew on Antonio Gramsci’s work on the “integral state”, which he defined as political society + civil society, or hegemony protected by the armour of coercion; and on Michel Foucault’s work on governmentality (governmental rationality) and his critique of the state and civil society.

The first four chapters present a critical governance studies perspective on market failure, state failure, network failure, and solidarity failure and the role of metagovernance in seeking to correct for these failures.

This raised the problem of how to respond to the failure of metagovernance. It requires what I describe as “romantic public irony” – a distinctive approach that accepts the likelihood of failure, but makes an ironic commitment to act cooperatively as if one can succeed. It involves maintaining an adequate spectrum of responses, recurrent reflections on success and failure, and choosing how to fail wisely.

This approach requires working publicly with partners in networks and communities to choose objectives, methods, and forms of governance and deciding how to respond to emerging signs of failure. Choosing to fail together may minimize the risks of failure by drawing romantically on the wisdom of crowds. It does not require that every decision should be based on networks and solidarity – this would be too demanding – but it does stipulate that the balance between markets, state, networks, and solidarity be elaborated through civil society.

The rest of the book presents the development of the WISERD civil society research in its first phase and then presents illustrative arguments based on my earlier research about global social policy, local economic policy initiatives, the stages of corporatism, and the role of competition as a mode of governance. The book concludes with a research agenda.