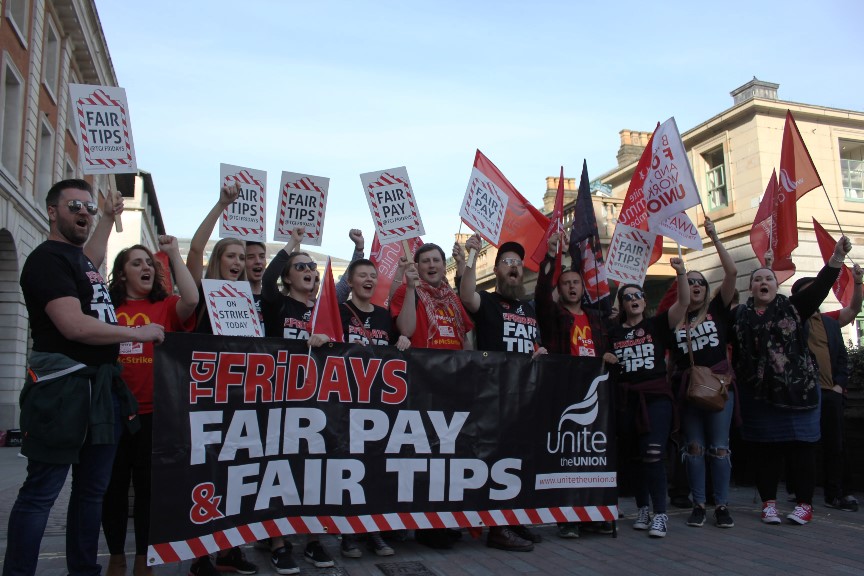 Another week, another strike. There is definitely something growing here. Hot on the heels of the UK’s second McStrike on the 1st May, staff at two TGI Friday’s restaurants went on strike over wages and tipping practices for the first time on Friday.

In our previous report from the McStrike picket lines at Crayford and Watford, we mentioned the successful ballot that afternoon of TGI’s workers from Milton Keynes and London. Last Friday was the result of that ballot (in which on a 75 per cent turnout, members unanimously voted to walk out) and over consecutive Fridays this week and beyond, more TGI’s restaurant staff will join the picket lines in London and Manchester.

While the McStrike is organised by the Bakers’ Union (BFAWU), the TGI strike has the support of Unite. This is a conscious decision, and one welcomed by both unions who see themselves not in competition, but in mutual support of one another. Together, they hope to build a broader movement across the service sector.

Why are they striking?

‘Fair pay and fair tips’ is the slogan of the strike. The dispute arose earlier this year when table staff were told with only two days’ notice that 40% of their tips from card gratuities would be taken and redistributed among kitchen staff. I heard from workers on Friday this amounts to losses of around £60 a week – or £3000 a year.

This is part of a sector-wide move towards increased use of the ‘tronc’ system, where all tips paid by card are pooled and redistributed to all staff in the business. Unite have raised concerns over the independence and fairness of such a system and have campaigned for fair tips for the past decade. It is also seen as way for employers to offset increases in the minimum wage; robbing Peter to pay Paul and disguising underpaying of kitchen staff.

Story of the day – #AllEyesOnTGIs

The day began with picket lines outside the Covent Garden and Milton Keynes Stadium branches of TGI Friday’s. Striking workers and supporters then made their way to Unite House in Holborn for a public meeting. Speaking on the panel were employees from the TGI’s and McDonald’s strikes, the Intercontinental Hotels Group and War on Want. An impromptu appearance from Ken Loach, director of I, Daniel Blake was greeted warmly by the audience. He, too, spoke about the importance of building a coherent, collaborative movement against low pay, pointing to the previous strikes by Picturehouse and Cineworld employees organised by his own union, BECTU.

Following a lively Q&A with the panellists, we made our way back to Covent Garden for the evening demonstration. Friday’s evening warm and sunny weather guaranteed them a captive audience of al fresco diners and pub-goers, who could not fail to see and hear the group as they made their way around a lap of Covent Garden, calling out their demands. It was encouraging for those involved to hear calls of support as they passed.

Back outside the Covent Garden restaurant, I was pleased to hear my favourite food-themed McStrike chant re-worked for the occasion:

‘Forget the burgers, forget the ribs, TGI’s are stealing tips!’

Also apparent was the sense of continuity between the McDonald’s and TGI’s strikes. Not only were several McStrikers present, they also symbolically ‘passed the torch’ of a chant that had been taught to them in turn by the US Fight for $15 campaign. This was deliberate, and represents exactly the aims that had been outlined earlier: to build and grow a broader movement against low pay.

TGI Friday’s CEO Karen Forrester has previously said she has over 4,000 children; her ‘Friday’s Family’. Last Friday, this familial feeling was far from mutual. However, the issues being confronted by TGI’s (and McDonald’s) employees are not solely related to the employment of young people. Staff at both chains vary in age, and the wage/tipping dispute applies to all.

Yet, there is an undeniable (and visible) generational element to these strikes. This may be just a product of the sector – the average age of employees still tends towards the younger end of the scale – but it might also signal that young people are becoming more inclined to join unions and campaign for better working conditions.

This will be easier to answer as these strikes continue, and if they are successful in expanding across the service sector as a whole. Although these strikes remain small scale, my feeling for now is that there doesn’t seem to be any such thing as ‘impossible to organise’ and that there is appetite for a refreshed trade union movement.