Recent results from the Children’s Worlds study revealed that children in Wales have some of the lowest levels of well-being amongst children surveyed in 35 countries. Children’s Worlds is an international study of children’s subjective well-being, with the third and most recent survey including over 128,000 children, surveyed between 2016 – 2019.

This is the first time that children in Wales have been included in the study, with 2,600 children in Year 6 and Year 8, from across Wales taking part. They were asked directly about many aspects of their lives, including their perceptions of their own well-being at school, home and their local area. Questions about their happiness, satisfaction and psychological well-being were also included, as well as questions on respect and participation in decision-making.

We know that children’s well-being in the UK has been on the decline since 2009 and it has been the subject of particular concern during the current Coronavirus pandemic. The seriousness of this concern has been highlighted through the announcement, by Wales’ Education Minister, of extra funding to be made available for school counselling services in preparation for the “impact [of the pandemic] on children’s emotional wellbeing”. The results from this survey can help put these fears into context by comparing levels of well-being both between and within countries.

Several countries from across the EU participated in Children’s Worlds, allowing responses from Wales to be compared to other, similar countries. Results from children aged around 10-years-old (in Year 6, in Wales) show relatively high levels of dissatisfaction in their lives as students, with 8.7% reporting low satisfaction. Interestingly, whilst satisfaction with classmates was relatively low, other factors associated with school, including the extent to which teachers help and care about them, did not show the same relatively low levels.

The children we surveyed were asked about their satisfaction with the things they have learned. Whilst children in Wales reported relatively higher levels of satisfaction with their learning compared to other aspects of school-life, these were still relatively low compared to children in other countries. The graphs show the percentage of Year 6/10-year-old children reporting low levels of satisfaction in those EU countries included in the survey. These are shown in ascending order, highlighting the relative position of Wales. 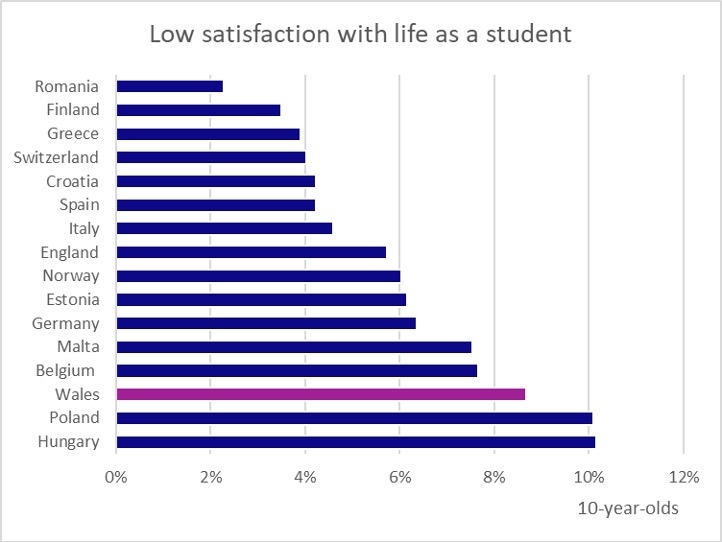 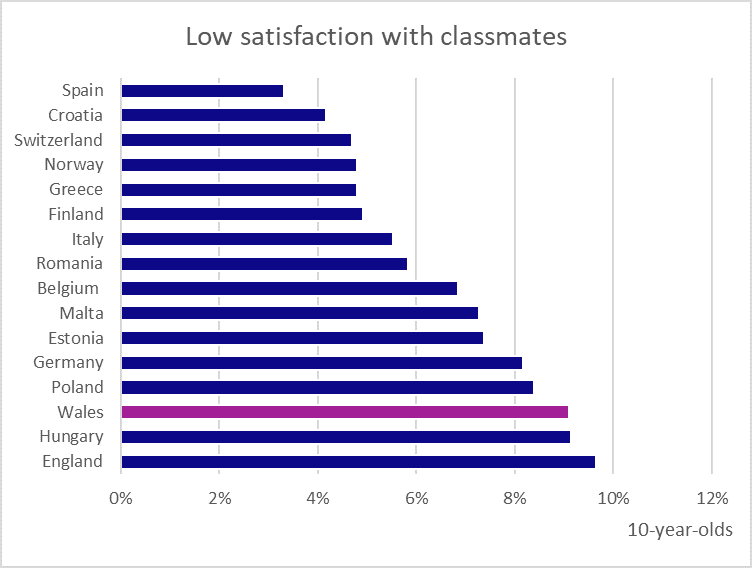 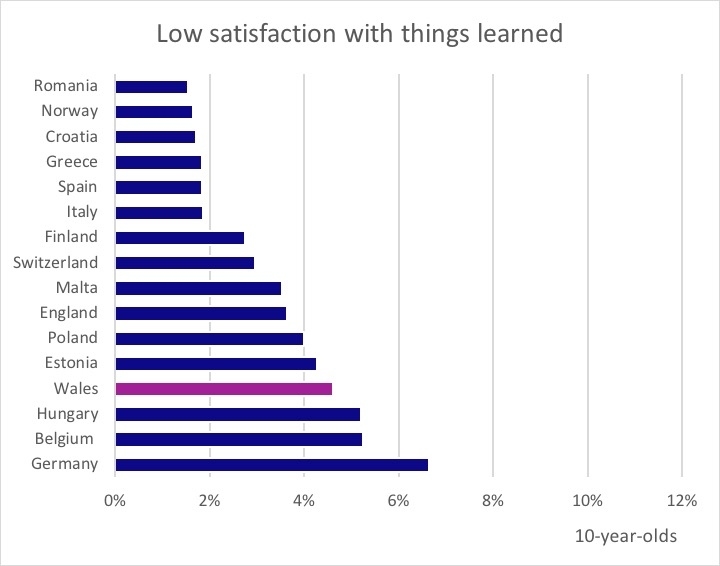 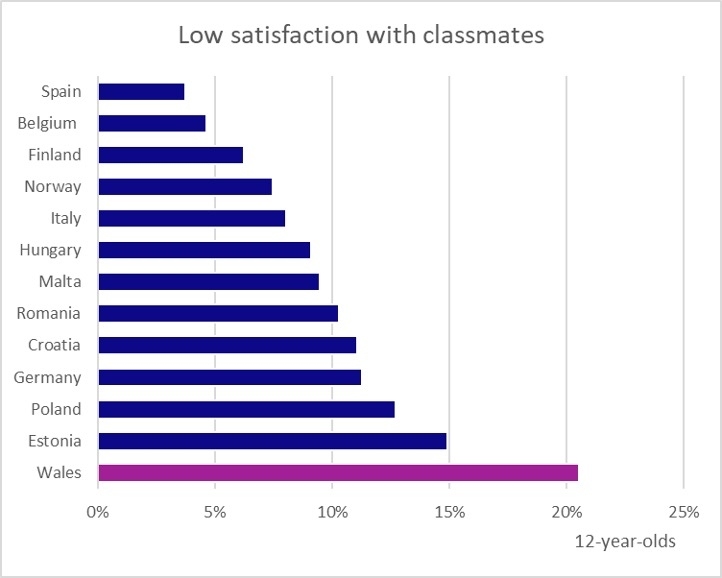 The relatively low levels of well-being reported by children in primary and, particularly, secondary school in Wales raise questions and concerns over their everyday experiences of school-life. Whilst this analysis is not a longitudinal analysis, tracking pupils over time, the relatively low levels of well-being expressed by children in secondary compared to primary school suggests something important about the nature and impact of this transition. The dissatisfaction with school-life is pronounced amongst secondary school children and the WISERD Education Data Lab is now carrying out more detailed analysis to identify what factors drive low well-being in school. The data also raises concerns about the relationships amongst school children at both primary and secondary school. This is explored further in the blog, Well-being of school children in Wales: bullying, which looks at the extreme version of poor relationships in this setting.

Children’s Worlds is the largest study of its kind, funded by the Jacobs Foundation and supported by multiple partners, including the Welsh Government and the Children’s Commissioner for Wales.