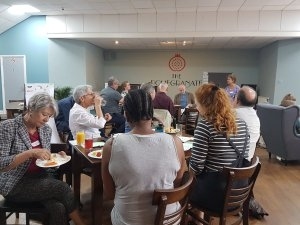 Dr Eva Elliott and Dr Ellie Byrne introduce The Cultural Participation Research Network, which was established in June 2017 with help from Cardiff University’s Strong Communities, Healthier People Flagship Engagement Project. The network aims to bring a range of individuals and organisations together in Wales to develop a programme of research around cultural participation and what it means for communities, culture, policy and government in Wales and beyond. They also provide an insight into the network’s first event, which took place on 22nd June in Cardiff.

In 2015, we were asked to lead on part of the Welsh Government’s FUSION programme, in response to Baroness Kay Andrews’ report on culture and poverty. FUSION was about connecting the culture and heritage industries to the outcomes of the now dismantled Communities First programme across the poorest parts of Wales. In many ways our project within FUSION – Fort to Pit to Port – was fruitful; we developed a good network of partners who felt there would be value in continuing to be connected in some way.

FUSION had its own successes, but was limited by a focus on pre-determined outcomes and there was no role for research; we never had the freedom to co-produce the type of network we might want. We decided to explore the idea of hosting a research network at Cardiff University, where these relationships could be nurtured and developed with a focus on the possibilities that research might bring to the table.

So what do we mean by cultural participation? For a start, we think it must be much more than people attending the cultural events and places that are sanctioned as ‘the arts’. For us culture is everywhere – people ‘do’ it. There are places all over Wales that have rich cultural histories and continue to sing, dance, play music and share reflections on experiences that are not recognised. Perhaps there could be a better connection between the different forms of ‘everyday’ culture and ‘formal’ cultures, and perhaps this could be part of a research endeavour.

We are all living in a world that is changing socially, economically and environmentally, in often frightening ways, and the impact on people is unequal. Surely people working in heritage and arts have a role in making sense of all of this, in working alongside not just audiences but participants in making sense of, documenting and imagining different ways of living well and perhaps of doing democracy.

Some of us also want to critique the practices of our established organisations and venues – the perception that the arts and museums only reflect the interests of an (albeit) sizable elite is palpable. Is this exclusivity partly because working class people and people from other excluded groups are not the artists, not the curators? How can we involve people from working classes and other backgrounds more?

To explore these ideas and practicalities of developing a research network, we gathered at The Pomegranate on 22nd June for an afternoon of discussion. There were seven questions which people discussed and debated over four inspirational hours, with a group discussion at the end leading to the next steps for the network.

We are about to get the ball rolling with some of the ideas and projects people talked about at this inaugural meeting, and will report back on these as they progress. For now, here are some quotes from people who attended our first meeting:

“The afternoon of discussion created a series of lightbulb moments for me, ranging from small environmentally friendly LED lightbulbs to stadium filling floodlights making me think of course why don’t we do that, genius! Getting ‘buy-in’ from senior colleagues created an impression on me and that’s something I will seek to make happen.”

“Lightbulb moments? I guess it was seeing that there are enthusiastic, like-minded people out there and that working together may actually make a difference.”

“The people in the room were inspiring. The salon’s informal structure allows for discussion, the possibility of building on ideas and connecting them with other relevant initiatives in a way that can only be achieved “face to face”. There was a real energy. The loose format enables people to break off into fluid groups to explore different aspects of connectivity, fuelled by interest in doing the work and the skills we can offer. It should make it easier to translate discussion into action.”