Over eighty people packed the Morlan Centre in Aberystwyth on Wednesday 25th January for the launch of the WISERD Centre for Welsh Politics and Society, with a lively discussion on ‘Brexit and Wales – the Key Questions’. 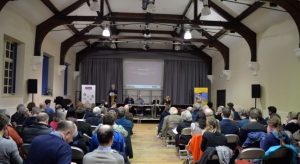 Following a week in which the Prime Minister Theresa May had set out her plans for negotiations with the European Union, the Welsh Government and Plaid Cymru had published their joint white paper on Brexit, and the Supreme Court had ruled that Parliament must have vote on Article 50 – but that the devolved legislatures do not have a veto – the event provided a timely opportunity to discuss what leaving the European Union will mean in practice in Wales, and the questions that Welsh politicians should be asking in preparation.

Four presentations set the scene, drawing on research by members of the WISERD Centre for Welsh Politics and Society, including from the ESRC WISERD/Civil Society programme. Dr Rhys Dafydd Jones presented figures on EU migration to Wales and posed questions that need to be answered about the future status of EU nationals in Wales, and the potential impacts of changes in immigration policy to the Welsh economy and society.

Professor Michael Woods focused on rural Wales, outlining the EU contribution to farming incomes, trade and rural development, and highlighting the challenges that could arise from new trade agreements, as well as the critical question of how any ‘Brexit dividend’ is distributed to Wales in determining whether current EU funding contributions could be matched post-Brexit.

Professor Elin Haf Gruffudd argued that the Welsh language had benefited from being part of multi-lingual Europe, and raised questions about the future of cultural ties and exchanges.

Finally, Dr Elin Royles described the significance of EU support for Welsh cultural institutions and questioned how lost EU funding would be replaced. 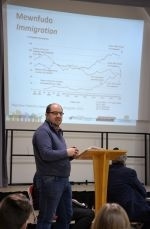 The event was organised to publicly launch the new WISERD Centre for Welsh Politics and Society, which was established at Aberystwyth University at the end of last year. The new centre brings together WISERD staff and research at Aberystwyth with the long-established and high respected Institute for Welsh Politics, and other researchers within the Institute of Geography, History, Politics and Psychology and beyond with an interest the study of contemporary Wales.

Professor Michael Woods, Co-Director of WISERD at Aberystwyth, said: “Our aim with the new centre is to develop our understanding of contemporary politics and Welsh society and to consider it in a global context. We are living in an age of significant political change and the centre’s activity will focus on key themes relevant to our day to day lives. The challenge of Brexit is a perfect example of this, and it was excellent to be able to discuss this issue with such a large and informed crowd at our launch.”