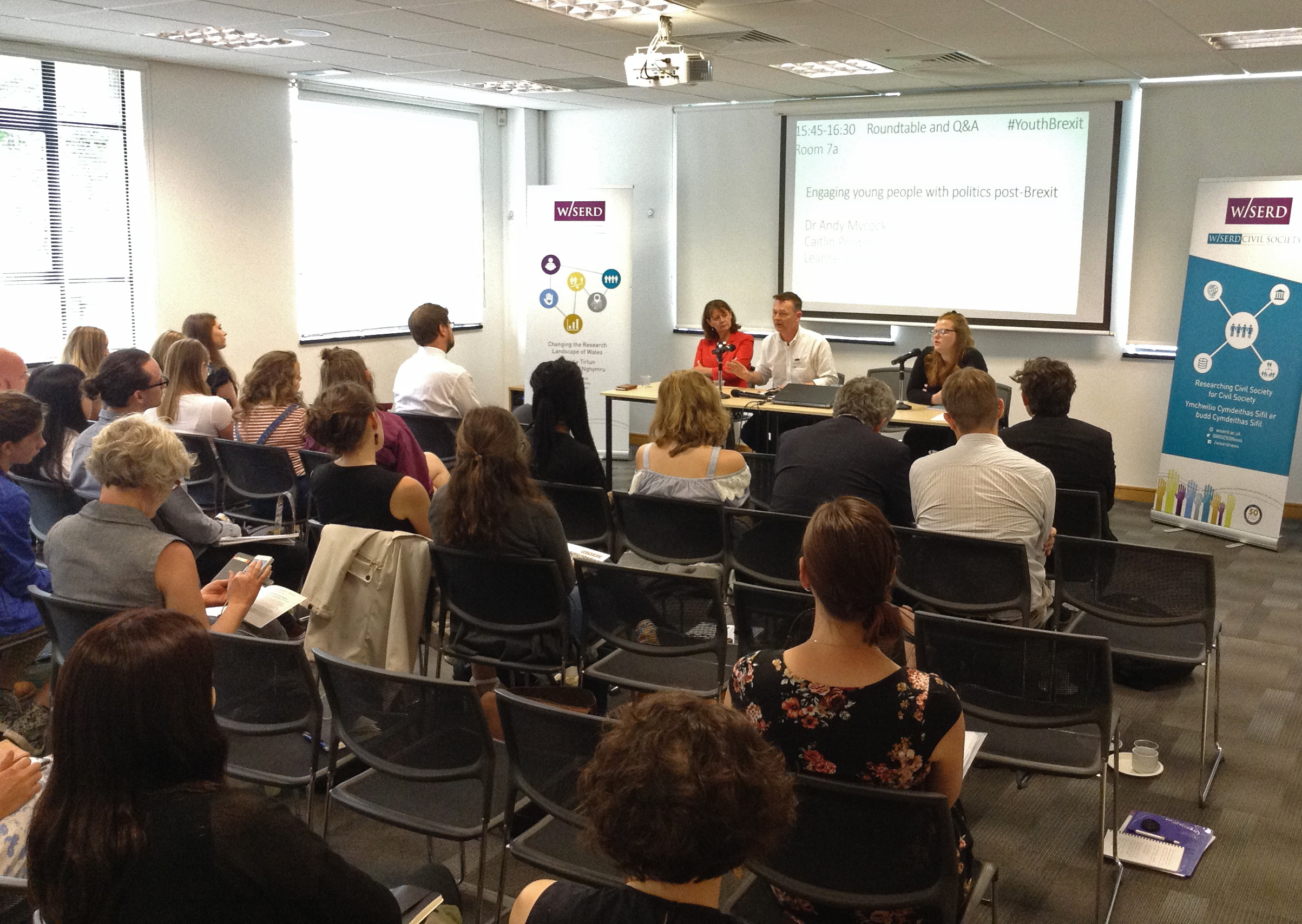 Grant Denton, a Politics and Sociology undergraduate at Cardiff University, worked as an Event Assistant at WISERD’s ‘Young People and Brexit: One Year On’ conference at the National Council for Voluntary Organisations (NCVO) building in London on 22nd June 2017. The event brought together academics, third-sector organisations, policymakers and young people for presentations and a roundtable discussion exploring Brexit and young people’s engagement in politics. Having played a key role in the organisation of this event, Grant reflects on some of the key themes that emerged throughout the day.

In the first session, Chris Curtis (YouGov) presented analysis suggesting that the traditional dividing line in elections between social classes has waned significantly. Meanwhile, divisions of political opinion between younger and older people have deepened.

I then attended a session on “Generational Divides and Brexit” with Dr Stuart Fox (WISERD, Cardiff University) and David Kingman (Intergenerational Foundation). Fox argued that although young people were less likely to vote ‘leave’ than older people, the chance of a young person voting ‘leave’ increased significantly if their main caregiver was Eurosceptic. Failure to take account of the transmission of Eurosceptic views from parents to their offspring could help explain why most polls did not predict the result of the referendum.

Kingman’s research dispelled the superficial claim made in a Huffington Post headline that young people had been “screwed by older generations”. He argued that the media has misrepresented the youth by presenting young voters as a homogenous group of passionate Remainers. In reality, young voters in the EU referendum can be categorised into four “tribes”: Eurosceptics, Affluent Pro-Europeans, Celtic Pro-Europeans and Left-Wing Pro-Europeans.

Next was “The legacy of Brexit” with Dr Avril Keating (Centre for Global Youth, UCL), exploring whether young people’s attitudes to Brexit, their perception of their identities or their aspirations for the future had changed since June 2016. Similar to Kingman, Keating categorised young people with different political beliefs into groups: Resolute Remainer, Resigned Remainer, Pragmatist, Soft Remainer and Leaver–  further emphasising that young voters should not be thought of as possessing homogenous political beliefs.

“The Impact of Brexit – Language and Identity” with Dr Elin Royles and Dr Dyfan Powel (WISERD, Aberystwyth University), explored how young people define what it means to be Welsh and whether the referendum result affected their understanding of Welsh identity. One person said they had originally thought being Welsh meant tolerating and welcoming multiculturalism. However, because that person believed many Welsh nationals voted ’leave’ to decrease migration, they started to question whether others shared their personal understanding of Welsh identity. Others felt their identity would remain the same regardless of whether or not Wales leaves the EU.

Finally, everyone attended a roundtable discussion on engaging young people in politics, with Leanne Wood AM (Leader of Plaid Cymru), Dr Andy Mycock (University of Huddersfield) and Caitlin Powle (young activist and Welsh Co-operative Party member). Two recommendations suggested by all three panellists that really stood out for me were lowering the voting age to sixteen and teaching politics in schools.

Seeing as young people will have to live the longest with the consequences of political decisions made now, it seems only fair that sixteen and seventeen-year-olds are given the vote. To help ensure young people are reasonably prepared to vote they could be given political education lessons in senior school. Teaching students about politics from a young age would hopefully encourage them to develop their critical thinking skills and formulate their own political views as they grow up and get nearer to voting. As a twenty-one-year-old, being able to identify with a fellow young person on the panel instantly made me feel more engaged in the discussion.

I found the conference thoroughly enjoyable and believe that discussions about how to engage young people in politics must continue, not just in the academic world but in the classroom too.