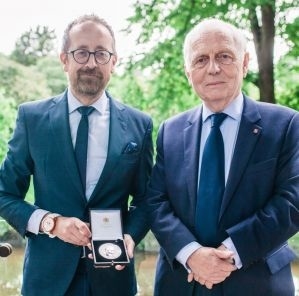 This week, the Learned Society of Wales awarded the inaugural Hugh Owen Medal, funded by the Welsh government, to WISERD’s Co-Director, Professor Chris Taylor in recognition of his outstanding contribution to educational research.

The ceremony took place at the Royal Welsh College of Music and Drama in Cardiff. This year, for the first time, the Learned Society of Wales awarded six medals in four different categories, all named in honour of significant figures from Wales’s distinguished history. Recognising merit is a significant aspect of the work of the national academy of Wales.

Professor Chris Taylor’s research is not only methodologically ground-breaking but has also informed the development of key education policies in Wales. Professor Taylor said, “I am very honoured to have been awarded the first Hugh Owen Medal by the Learned Society for Wales. It is important we recognise the importance of research in the Welsh education system. Without this we cannot be confident that our education policies and practices address the right issues or will deliver effective results”.

Professor Taylor continued, “This is fantastic recognition of the educational research that we conduct in the School of Social Sciences and WISERD, and I am extremely grateful for all the support I have received from the many colleagues I have had the wonderful opportunity to work with. Having supportive colleagues who will listen, challenge and support us is incredibly important in helping us undertake original, significant and rigorous research.” 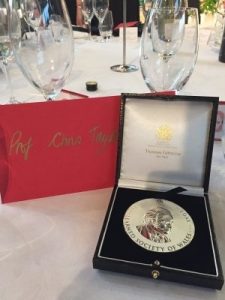 The medals were created to inspire and recognise the long, and often overlooked, legacy of Welsh achievement, while also celebrating the exceptional researchers of today. In this, the ‘year of legends’, the medals highlight the work of today’s Welsh researchers, which in turn will inspire those in the future.

The Learned Society of Wales is Wales’s first national academy. The aim of the society is to establish itself both as a recognised representative of the world of Welsh learning internationally and as a source of authoritative, scholarly and critical comment and advice on policy issues affecting Wales. Two fellow WISERD colleagues, Professor Sally Power and Professor Mike Woods, were among the newly elected fellows of The Learned Society of Wales last month.

On awarding the medal, Sir Emyr Jones Parry, President of the Society commented, “Education should offer everyone the opportunity to develop their talents, to learn and be exposed to ideas. We all need to do better, and excellent practical research can help shape more effective policies”.

Sir Hugh Owen was a significant Welsh educator, philanthropist and pioneer of higher education in Wales. He was the main founder of the University College of Wales at Aberystwyth.

Active within the work of the British and Foreign School Society in Wales and the Cambrian Educational Society in the 19th century, Owen enthusiastically supported the opening of more such schools in Wales. As the number of such schools increased, Owen saw the need for colleges to train teachers in Wales, and he was one of the leaders of the campaign to establish Bangor Normal College in 1858, a similar college in Swansea, and the Aberystwyth University College in 1875.

One of Hugh Owen’s last benefactions was the establishment in 1880 of the North Wales Scholarship Association, a fund to provide financial assistance for children from north Wales to attend secondary schools.

In 1881, he laid the basis for a complete scheme for secondary education in Wales, which after his death was carried into effect, by means of the Welsh Intermediate Education Act of 1889.

In recognition of his ‘services to the cause of education in Wales’, Hugh Owen was knighted in 1881, but died in October of the same year.

The Hugh Owen Medal is sponsored by the Welsh Government. Speaking at the launch of the medal in November 2016, Kirsty Williams AM Cabinet Secretary for Education commented, “We always need to ask ourselves what will the benefits be of this research to the Welsh public. It is important not to lose sight of why we are carrying out research in the first place – its purpose, and who will benefit from its findings – and I’m pleased this award will recognise the real impact of research in this crucial field.”