As a part of the development process for the Connected Communities programme, the AHRC supported research reviews in 2011 to address a wide range of underpinning issues. The aim of these reviews was to: stimulate debate and provide some early outputs from the programme; inform future discussions about its shape, focus and priorities; and be of value to researchers undertaking research under the programme in the future. This review addressed ‘Social networks and later life’ and ‘The impact of Information and communication technologies (ICT) on community and older people’.

The aim was to undertake a review of the research literature addressing community, connectivity and later life in two key theme areas:

I: Community, Place and Belonging in Later Life

The roles and experiences of older people in communities has been a focal point for community studies in the past.  In the new material circumstances and social relations that have accompanied the economic and technological changes of second modernity, communities of interest become increasingly important. Older communities of propinquity and attachments to locale and place remain; but in different circumstances.  For older people these changes throw up contradictions and tensions; as being linked to local communities may have beneficial aspects and be desired but may be associated with being stuck, unchanging and old. For some who have the financial and social capital community may involve active choices; for others it may be part of an experience of isolation and exclusion.  There is a considerable literature on ageing and place which highlights important links between the environment, individual characteristics and successful ageing.  This has influenced national and international policies with respect to later life. While there is evidence to support associations between place and well-being in later life there is room for caution and researchers have also identified potential drawbacks to ageing in place. There is evidence that ageing is related to a growing sense of attachment to place but the relationship is complex and there are ambiguities and countervailing effects.

Research has shown that civic engagement and social participation is important for well-being in later life and for the development and maintenance of community networks.  However, in the main, studies are cross sectional and causality remains unclear.  Studies of migration in later life indicate complex patterns of mobility leading to the formation of new forms of social relations, friendships, support, reciprocity and social exchange.  The impact of large retirement migration flows on local and transnational community networks, on identity formation and on national welfare services is still not well understood. The research on gender and community indicates important pathways that maintain community cohesion and health but for women there are also potential negative effects.  Although most of the literature on community and place and ageing deals with urban environments there is an important and growing literature addressing ageing in rural areas.  An important finding is that social changes impacting on rural areas are undermining traditional accounts of community and later life.  Policies to address rural poverty and ageing have been criticised for not taking account of the heterogeneity of later life in these areas.

With its emphasis on the interrelationship between individual and contextual factors over the life course the convoy model provides an important and useful framework for studying social networks among older groups.  Research has identified different social network types and these have been found to be good predictors of levels of well-being.  Caution is however necessary as these network types may vary cross-nationally and culturally. The quality of social ties and relationships may become more salient in later life.  Age is related to network size, structure and density and there is a strong ‘U’ shaped relationship between age and volume of contact among network members (though this is mediated by life events).  The research evidence for the relationship between social networks and health is largely cross-sectional and issues of causality, measurement and countervailing effects remain. Overall, research on social connectivity and later life has identified key factors that may influence levels of connectivity but there are a number of contradictions and paradoxes in the literature leading to some debate and controversy. The influence of the increasing engagement of older people with ICT on these debates remains limited.

Patterns of ICT adoption and use are rapidly evolving and although there are lower levels of adoption among older people there is evidence that older groups catch up quickly and that there may be generational effects at work. ICT may facilitate the development of aged based communities of interests or intentional communities. The broad evidence of an age based ‘digital divide’ is likely to be a crude division that hides patterns of inequality and diversity among older groups themselves and there is evidence that older people can and wish to become active users of technology. The evidence for the impact of ICT on health and well-being is mixed and there is some evidence that older people may be being treated as passive objects of research. There is a strong case for researching ICT and ageing from the perspectives of the third and fourth ages.  While different technologies differ in their immediate benefits, at both individual and community levels, the dangers and risks for older people associated with these technologies remain.  These tensions are not fully articulated in the literature. 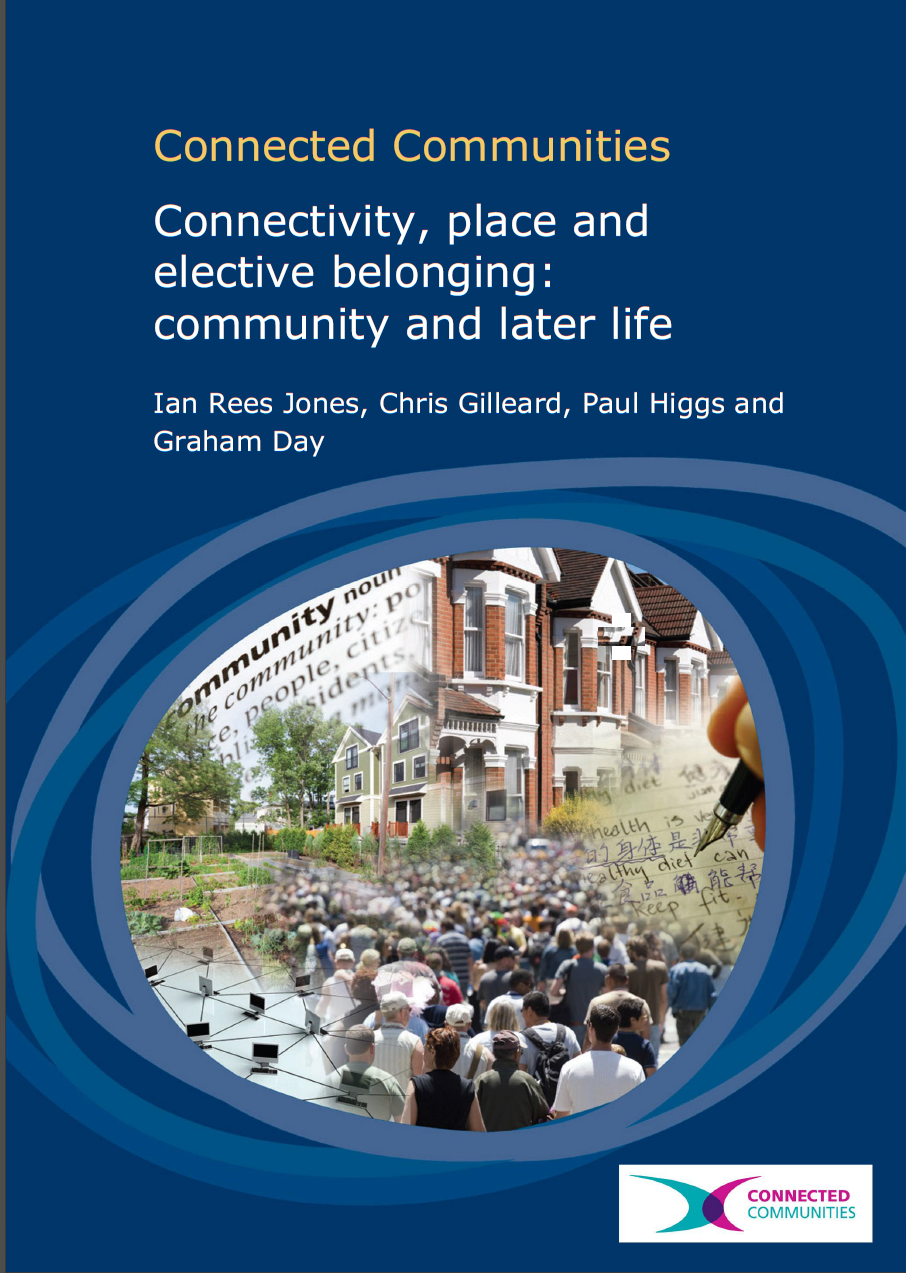 This paper presents preliminary findings and a summary of the work undertaken as part of an AHRC funded review of the literature addressing community, connectivity and later life. Two key theme areas were addressed; ‘Social networks and later life’ and ‘The impact of Information and communication technologies (ICT) on community and older people’. In addition…