The research was concerned with examining the degree of integration of people for whom their national origins or those of their parents lies in a country outside the European Union.  The justification for studying the living conditions of neighbourhoods in which there is a large percentage of the population who are migrants from third countries was twofold: to identify the degree of integration of migrants and to identify the influence upon living conditions in these areas of the presence of a significant population of third-country migrants who may be subject to social exclusion.

The analytical work was undertaken primarily on the 2007 European Quality of Life Survey, with data from other sources being interrogated for the purposes of contextualisation and validation.  The research raised interesting questions around the definition of neighbourhood and how this can be operationalised in survey sources.  There was also clear potential for qualitative follow-up, in terms of research on ethnic/migrant dense neighbourhoods in Wales. 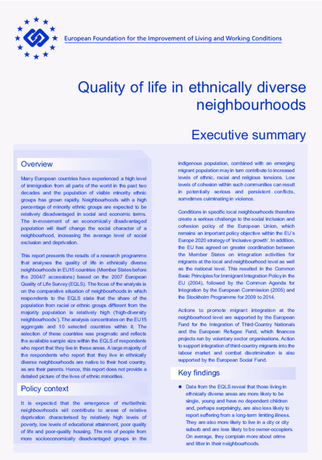 Many European countries have experienced a high level of immigration from all parts of the world in the past two decades and the population of visible minority ethnic groups has grown rapidly. Neighbourhoods with a high percentage of minority ethnic groups are expected to be relatively disadvantaged in social and economic terms. The in-movement of…