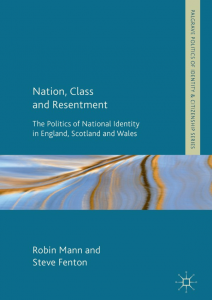 Sociologist and lecturer, Dr Robin Mann, based at Bangor University’s School of Social Sciences, discusses the differences in the way that national identity is expressed in Wales, Scotland and England, and how national identity affects attitudes towards current issues such as Brexit and immigration in a unique comparative study, which has recently been published.

In The Politics of National Identity in England, Scotland and Wales, published by Palgrave, Robin Mann and Steve Fenton, Professor Emeritus of Sociology at the University of Bristol, reveal how changes in contemporary capitalist economies have shaped people’s sense of national belonging today. They also explain how different national identities relate to attitudes towards devolution, Europe and immigration in the three countries.

Robin Mann explains: “Economic changes, especially global movements of capital and employment, have fostered uncertainty and anxiety amongst some middle and working class people who perceive themselves to be losing out, leaving them resentful and disenchanted with mainstream politics”.

Dr Mann adds: “These social changes have led in different directions in England, Wales and Scotland. Most notably, Scotland has avoided a resentful nationalism by drawing those voters who abandoned the Labour Party towards the SNP and ‘progressive nationalism’. In England a progressive nationalism is problematic because of the way English identity is historically tied to class and empire. Wales is arguably more complex. On one hand, Plaid Cymru voters, and Welsh speakers, are more likely to be pro-immigration and pro-remaining in the EU. On the other hand, Plaid has difficulty in extending its appeal within Labour voting areas, we saw the emergence of UKIP in the Welsh Assembly and Wales overall voted to leave the EU. Thus looking across England, Scotland and Wales, and examining the differences between them in identity and politics, is very revealing.

Commenting on the role of sociology, Dr Mann said:

“As we enter a new period, sociology can help to explain what is going on behind the current populist politics – our own research shows that the economic grievances and political mistrust underlying Brexit have actually been around for quite some time. If we are to understand Brexit, then we need to place it in its proper social and historical context. That means we should continue to look retrospectively at how ideas of nation and identity have taken form, and how they structure the political choices that are available to people today”.