The aim of the European Social Fund (ESF) Leavers’ Survey was to assist in assessing the effectiveness of the 2007-2013 ESF Convergence and Competitiveness Programmes in Wales.  The two ESF Operational Programmes (referred to as the Convergence and Competitiveness Programmes) benefiting Wales for the programming period 2007-13 provided just over £1.4 bn1 of investment, with approximately 85% of this channelled through the West Wales and the Valleys Convergence Programme. The interventions supported by the Programmes related to investment in human capital and fall under two broad categories; those aimed at increasing employment which primarily support those not in work (Convergence Priority 2; Competitiveness Priority 1) and those aimed at increasing skills among those in work (Convergence Priority 3; Competitiveness Priority 2).  Given the scale of the investment, an evaluation of the impact of measures supported by the Programmes is important. The surveys collected information on: the pre-entry characteristics of ESF participants; their motivations for participation; the skills acquired as a result of the intervention and details of the careers of respondents since completing the project. Employment outcomes, ‘softer’ benefits from learning (such as increased confidence) and entry into further learning was also identified.  The interviews included questions to explore participants’ levels of satisfaction with their courses, and their perceptions of the benefits they experienced as a result of participating in an ESF project. To date, separate reports based upon analysis of the 2009, 2010, 2011, 2012 and 2013 surveys have been published, along with a reports combining data from 2009 and 2010 surveys and most recently the 2009-2013 surveys.  Taken together, the combined programme of research has made a valuable contribution to our understanding of the experiences of leavers from ESF funded projects. 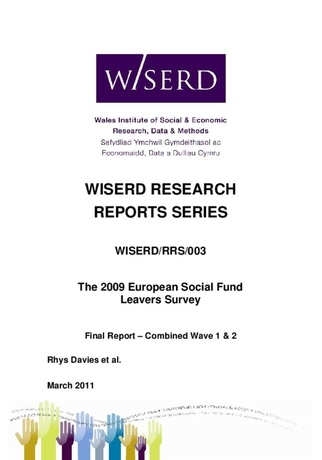