Amy Sanders was awarded a BSc Econ and MSc Econ from the University of Wales, Swansea. She undertook her PhD at Cardiff University on the subject of ‘Institutionalising equalities?  Exploring the engagement of equalities organisations in the Welsh third sector-government partnership’.   Amy first joined WISERD as a PhD researcher in Cardiff University and she was appointed as a Research Associate in WISERD in Aberystwyth University in 2021.

Beyond academia, Amy spent over 16 years working on projects that brought the third sector and public sector together.  She was a director of a Welsh workers cooperative which promoted equality and citizen engagement, and she coordinated participative projects for Welsh Government, local and public authorities and third sector organisations in every local authority in Wales.  She also served as a Community Development Officer in a Community House in Swansea, and she was the Swansea Anti-Poverty Officer and coordinated Swansea Poverty Action Network.

Research interests: Amy’s research interests include civil society, equalities and civil society-state relations.  She has an interest in how equalities organisations achieve descriptive and substantive representation and the related implications for democracy theory.  She is also keen to explore how third sector organisations seek to influence policymaking through different mechanisms on the insider-outsider continuum. She is interested in interorganisational relations and how equality and inequality is made manifest across civil society.  In terms of equalities strategies, she has an interest in mainstreaming, intersectionality and applying feminist institutionalism to a broader interpretation of equalities.

Current research: Amy will be working on three WISERD research programmes that form part of the ‘Changing Perspectives on Civic Stratification and Civil Repair’ programme.  The first is concerned with political polarisation as it manifests itself within civil society organisations.  She will specifically be exploring how the circulation of ideas, arguments and discourses within local civil society networks has contributed to the rise of populism and polarisation of politics in Britain and the United States, and what part civil society can play in addressing social and political polarisation. The second is examining elites roles and systems of patronage within civil society in the context of Welsh Civil Society.  Amy is exploring the systems of patronage within civil society and the connections between civil society, civic stratification and elite formation. The third will research the new repertoires of social mobilisation adopted by civil society in the climate movement.  It has a particular focus on the nature of new technology-enabled transnational repertoires and how these contribute to the shifting dynamics of civic stratification in the age of uncertainty. 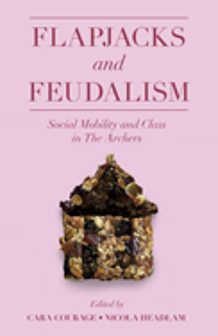 Llyfrau a Phenodau Llyfrau
“From the moment those two joined the committee it’s been grunge bands, sumo wrestlers and souffle competitions”: What Ambridge’s civil society says about UK politics in 2019′

Flapjacks and Feudalism: Social Mobility and Class in The Archers | Section 5 It Takes a Village… | Chapter 15 This study examines the discursive accounts of civil society in a rural English village to understand what these reveal about contemporary political discourses. It employs a critical discourse analysis of the conversational interactions of Ambridge residents….