This project builds on previous WISERD research into geographical variations in trade union membership in Wales. (Beynon, Davies and Davies, 2012). The research programme derives from this analysis, which suggested that in South Wales collective understandings, rooted in an earlier period of unionisation, are spilling over into the contemporary period. This work was supported by a series of interviews with trade union officials drawing on their experiences of trade unionism in different parts of the UK.

The quantitative research programme will utilise data from nationally representative surveys, including those used in official estimates of trade union membership. The qualitative data will develop this analysis more intensively and will focus on the concept of ‘spillover’ in relation to three distinct groups: i) rank and file trade union activists based in both the public and private sectors; ii) non-unionised young workers employed on ‘non- traditional’ labour contracts in retail, hospitality, food and drink (exploring the influence of the changing nature of the economy and work organisation in establishments with a history of low trade union recognition and membership); iii) and finally migrant workers (in terms of how unions are adapting their structures and strategies to engage with this group). 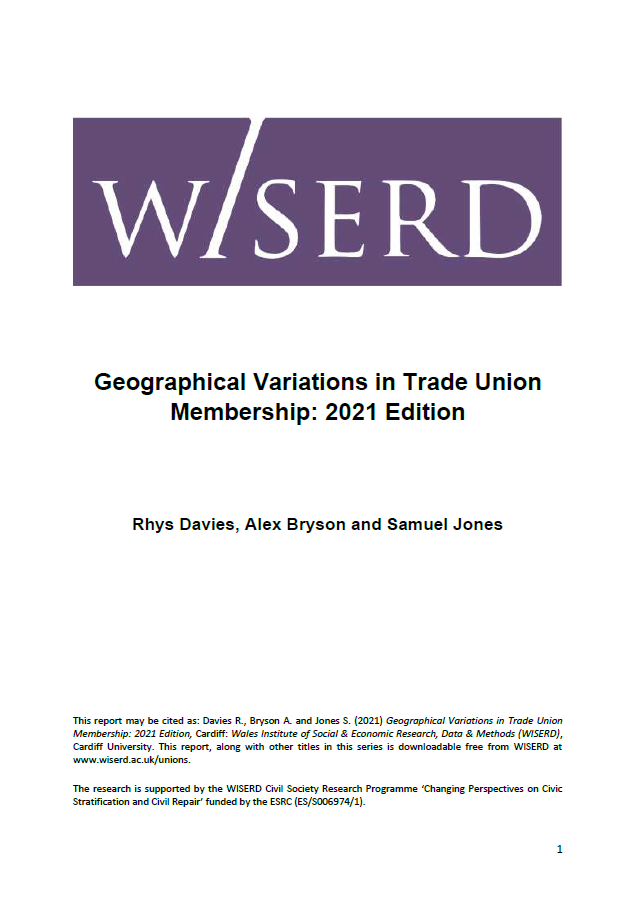 This Research Note presents new estimates of trade union membership derived for detailed geographical areas across Great Britain. Analysis reveals the wide variations in union density that exist both across the country and within particular regions.  Over the period 2000-2019, union density is shown to vary between 9% in Kensington and Chelsea to 54% in… 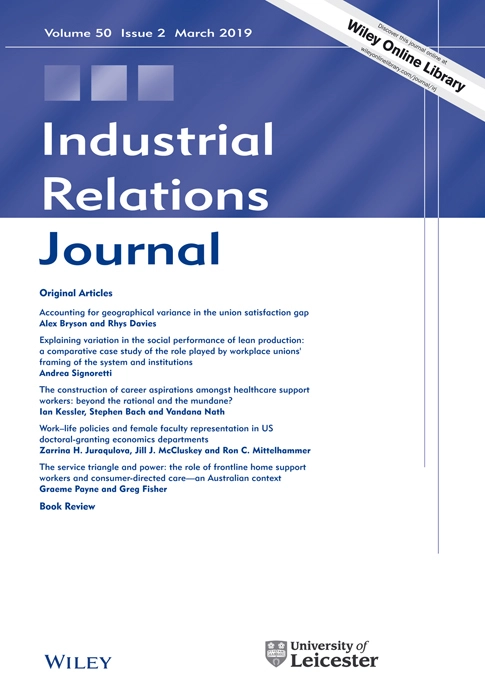 Evidence of spatial variance in the relationship between trade union membership and job satisfaction is limited. Using three nationally representative data sets, we examine lower levels of satisfaction among union members and considers how this relationship varies geographically across the nations and regions of Great Britain. The analysis demonstrates that the union satisfaction gap can… 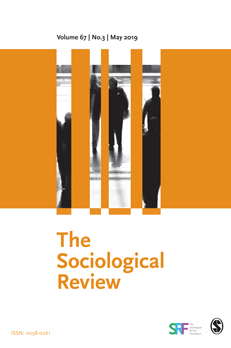 This article develops theories of collective memory by attending to the everyday practices and meaning-making involved in creating and sustaining sites of heritage. While research across disciplines linked to memory studies has increased in recent years, with a notable sociological contribution, as yet ethnographic understandings of how collective memory is produced and maintained through locally… 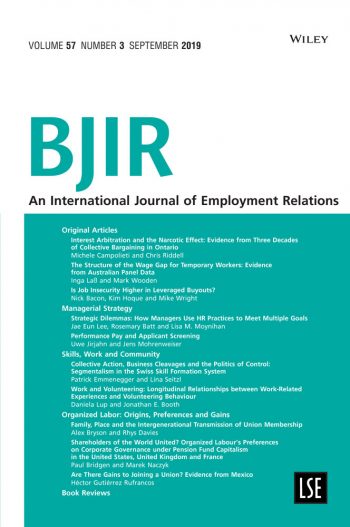 This article examines the importance of family, gender and place to the intergenerational transmission of trade union membership. Using data from the British Household Panel Survey, we show that union membership among parents influences the union joining behaviour of young workers. These effects are particularly apparent among daughters and where both parents are members of… 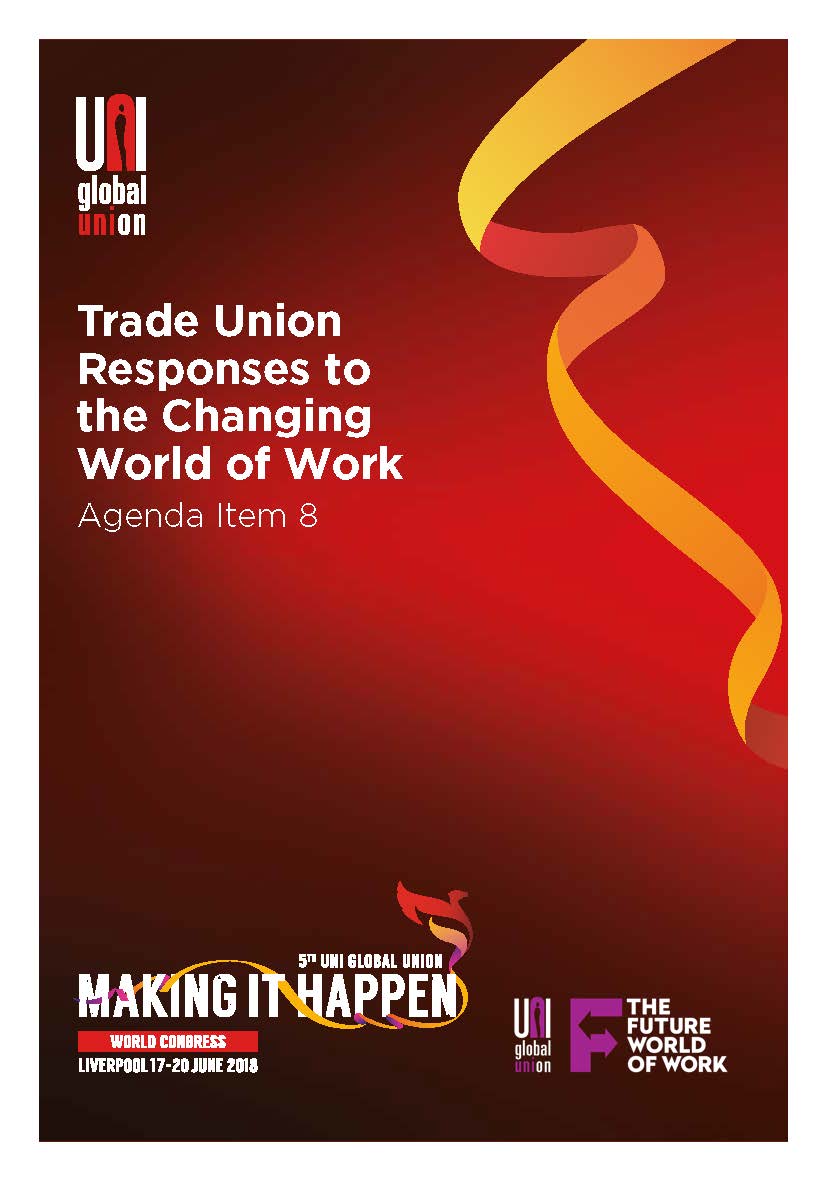 This report focuses on the strategic capacity of unions to both develop old, and build new, resources and capabilities in response to the rapidly changing world of work. While there are important variations across countries and regions, a number of global trends present challenges to trade unions. 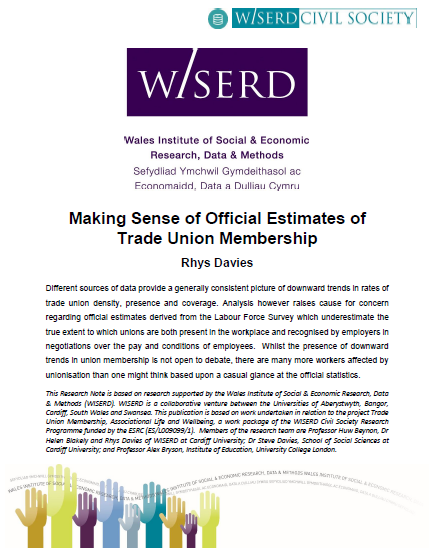 Different sources of data provide a generally consistent picture of downward trends in rates of trade union density, presence and coverage. Analysis however raises cause for concern regarding official estimates derived from the Labour Force Survey which underestimate the true extent to which unions are both present in the workplace and recognised by employers in…

The statistical compendia provides the most comprehensive statistical portrait of regional variations in trade union membership, presence and coverage in the UK undertaken to date.  The analysis explores both trends in membership and how membership varies among different groups within the population and by selected job and workplace characteristics. 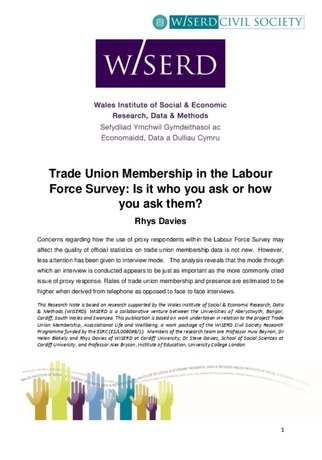 Adroddiadau a Briffiau
Trade Union Membership in the Labour Force Survey: Is it who you ask or how you ask them?

Concerns regarding how the use of proxy respondents within the Labour Force Survey may affect the quality of official statistics on trade union membership data is not new. However, less attention has been given to interview mode. The analysis reveals that the mode through which an interview is conducted appears to be just as important…

The 1984-85 miners’ strike has once again hit the headlines, despite ending 36 years ago. This time what has grabbed the media’s attention is a claim by Prime Minister Boris Johnson that Margaret Thatcher’s closure of the pits after the strike was part of a green, eco-strategy of the Conservative government. On a visit to…

Within England and Wales, March 21st, 2021 is census day. Taking place every 10 years, the census provides the most accurate estimate of the population and a detailed account about people and the households in which they live. The data is vital to understanding our society and in providing information that is necessary to support the…

The impact of Covid-19 on the economy and the world of work is unprecedented: full or partial lockdown measures are affecting approximately 80 per cent of the global workforce, with the harshest effects falling disproportionately on unprotected workers and those working in the informal economy[1]. For trade unions, the Covid-19 pandemic has cast light on…

“Just think about it, next year, both the Durham Miners’ Gala and the Notting Hill Carnival will take place in seats represented by Conservative MPs” Michael Gove, December 2019. The Durham Miners’ Gala, established in 1871, is the largest annual gathering of trade unionists in the UK. Despite the last coal mine in County Durham…

Strikes have taken place at McDonald’s and TGI Friday’s restaurants across the UK in recent months. These strikes are the first of their kind in the UK, instigated by a new generation of trade union members fighting for better pay and fairer working conditions.  At the Wales Institute of Social and Economic Research, Data and…

Rhys Davies presented his work at the Labour Force and Annual Population Surveys User Conference 2016 today, at the Royal Statistical Society in London. Data producers and data users came together to share updates on the development of these surveys and to showcase research that is being carried out using the data. Rhys Davies’ presentation…

Unions have faced decades of hostile legislation designed to make them ineffective, have seen the collapse of parts of the economy that were union strongholds and the growth of precarious work. They have been written off as out of date and out of time. Yet although union density and membership have declined since the 1980s,…

Rhys Davies presented a paper, co-authored with Alex Bryson,”What Do Unions Do In Wales? The Case of Job Satisfaction” Conference paper available here